One thing leads to another when I start browsing Facebook and Blogs. You never know where it will lead you. Such fun!

I have spent the past hour trying to prove whether this first snail is real or not. Still not sure. Someone recently claimed to find one in Northern California. Click here to learn more about it if you are curious. 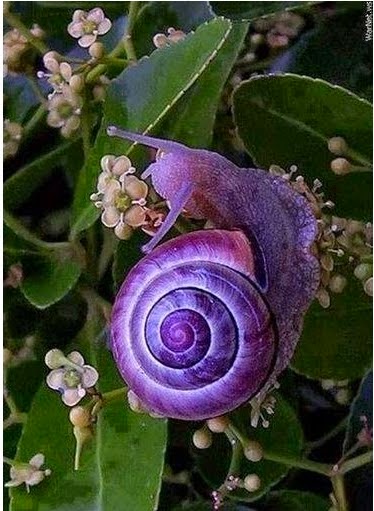 But the next two are for real and I have put the links below.
Just click on the captions directly below each photo.

Life of the Common Purple Snail -  Life of Sea

Here is what Wiki has to say about purple snails.

So what does any of this have to do with quilt history?
Human beings love for colored cloth!
Especially purple since it was discovered by the "purple people" -- the ancient Phoenicians.


But at first only the rulers wore purple. 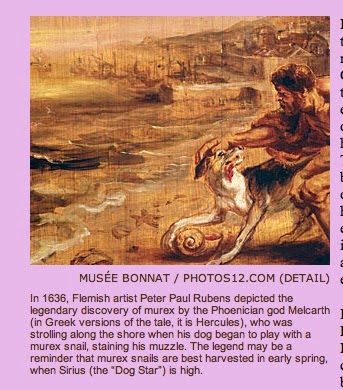 "Murex is the dye first famous as “Tyrian purple,” named for the city of Tyre, today in Lebanon but 3000 years ago the center from which that energetic trading nation, the Phoenicians, controlled a far-flung luxury trade in murex-dyed silks. Later, the dye was known as “royal purple” or “imperial purple,” from the Roman and Byzantine emperors who reserved the color for members of the imperial family."     Philippa Scott

To get the whole story, read this whole fascinating article on
the discovery of a "royal" purple from sea shells
by Philippa Scott by clicking here.

Click here to see a video of the Murex extracted purple color.

Hope you're not squeamish. Be forewarned.

Here is a written explanation of the process.

What happened when 18 year-old English chemist William Perkin accidentally discovered a way to produce mauve in mass quantities? This is such a (yes!) also fascinating read!  His lucky accident "revolutionized organic chemistry — and fashion" according to some. 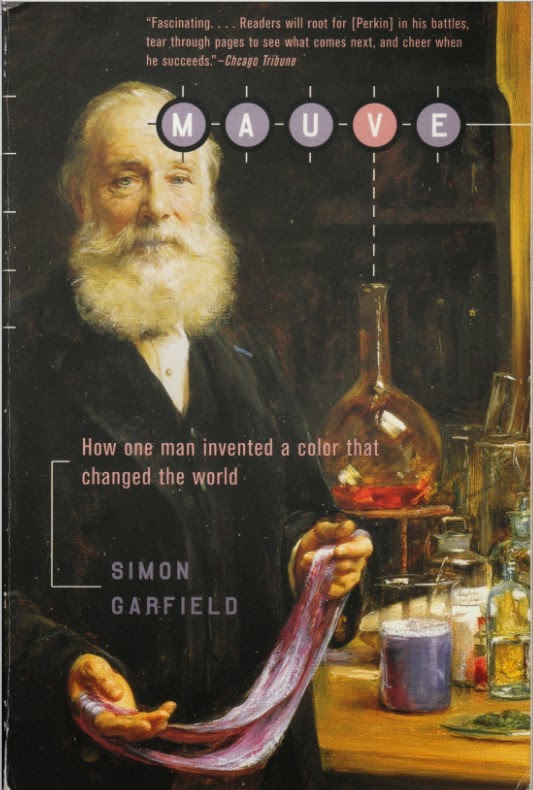 Don't have time to read the books? Just click on the links (the highlighted words) throughout my posts.

A review by The Guardian:  "Mauve with the times.
Since its accidental creation in the 1850s, the colour has aroused strong emotions. Simon Garfield chronicles a vivid history. 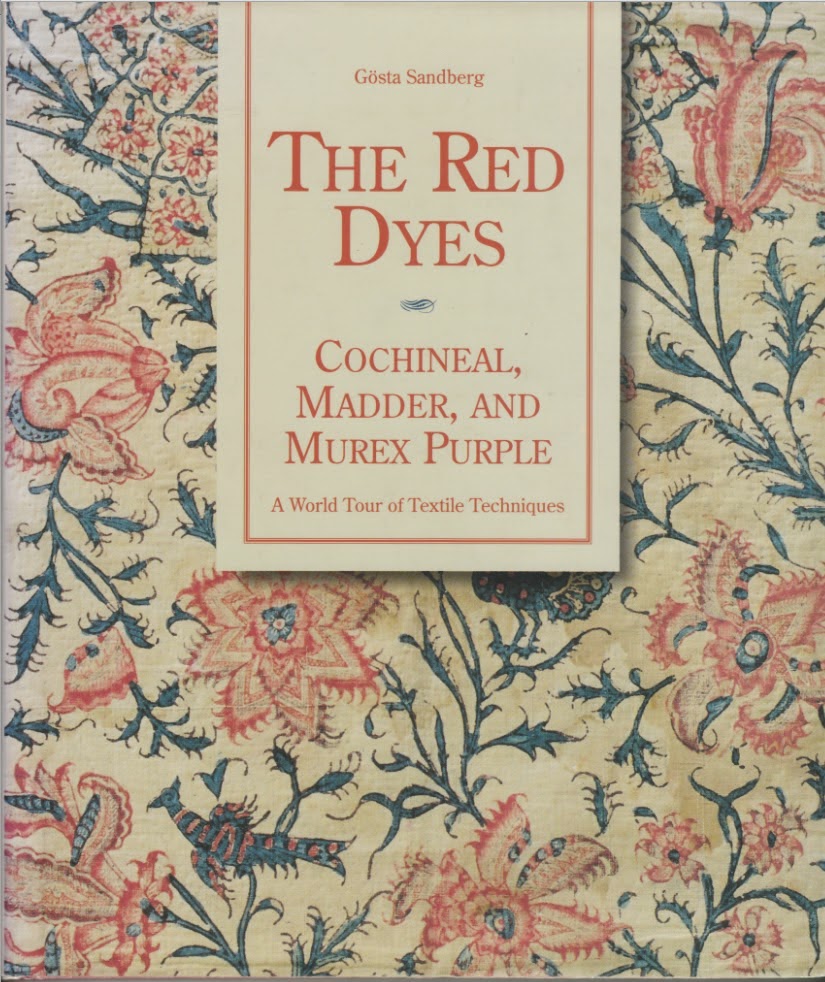 This book reveals the fascinating history of how the natural red dyes came to various people and cultures centuries ago. Click here to find a copy.

Click here to read more interesting details about the meaning of the color purple
among various cultures through-out history.

Posted by KarenQuilt at 9:48 PM No comments:

We have been having a discussion on the Facebook list Quilts-Vintage & Antique about the various small booklets that Stearns & Foster has published over the years about their Mountain Mist quilt patterns. I also have a larger magazine format book published by Oxmoor House on Mountain Mist patterns. Here are the covers of the four "booklets" in my collection. I just found a 5th one on eBay today with still another colorful cover dated 1938 which should arrive in a couple of days: 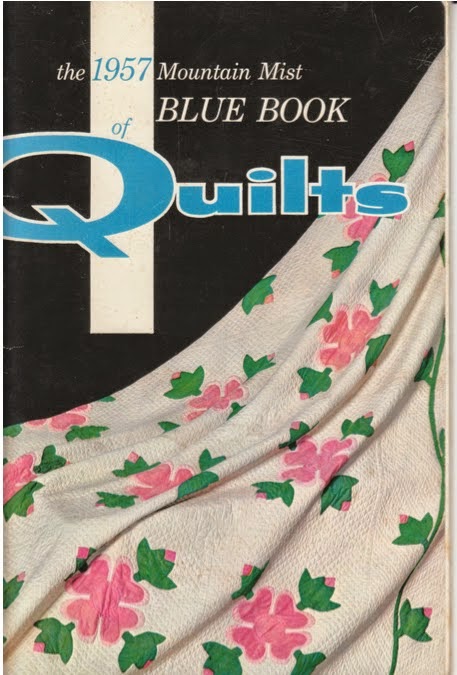 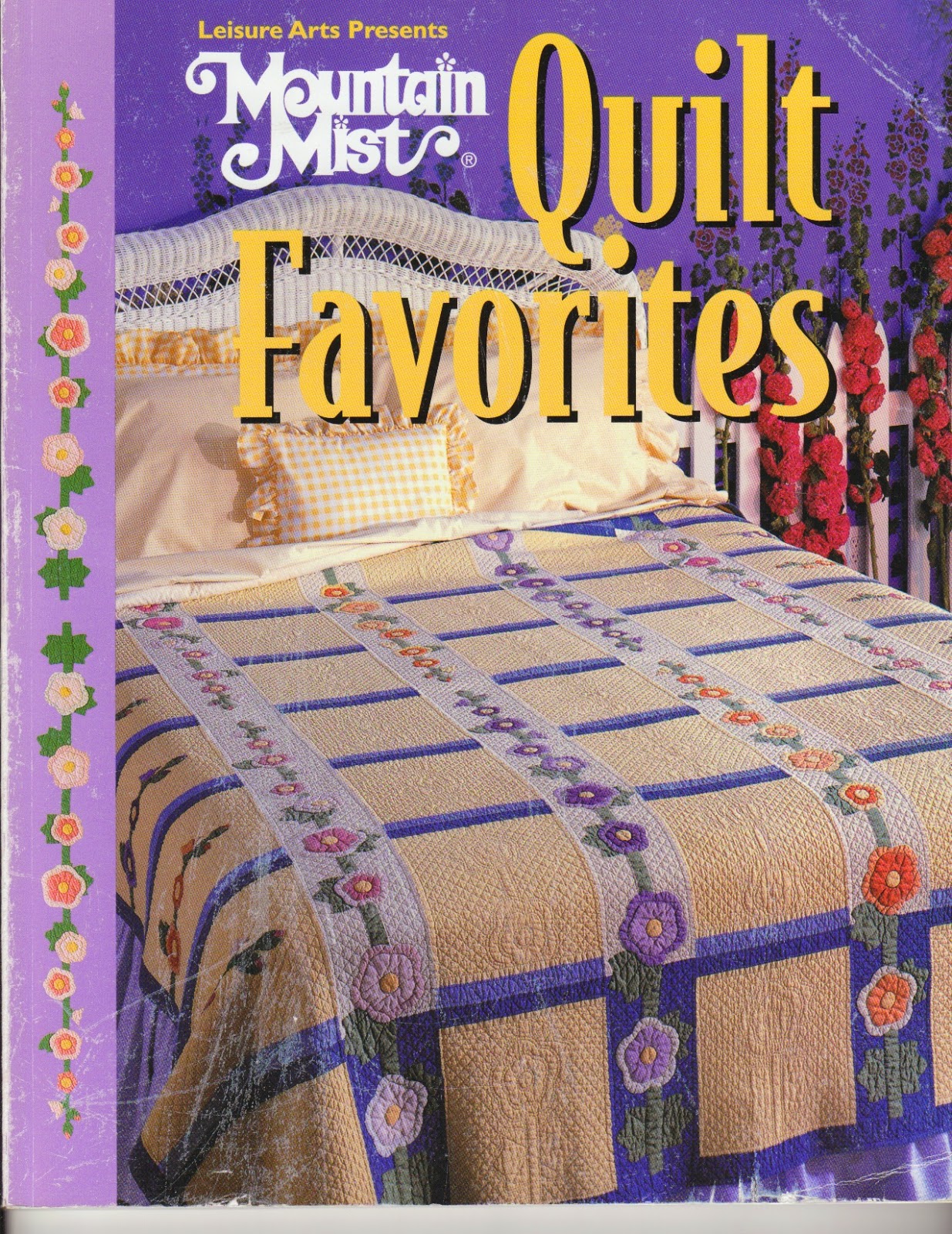 Here is the 1938 Mountain Mist Blue book cover now on the way: 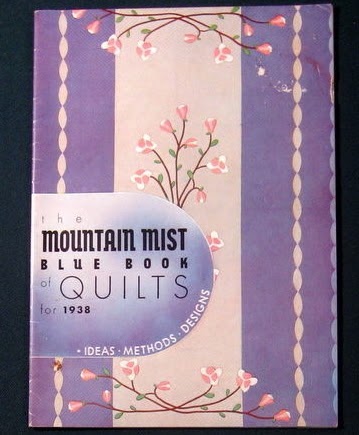 Collecting quilting ephemera is a fun sideline to collecting quilts.  Before the Internet, paper ephemera were collected to try to help identify quilts. Prior to copy machines, collectors traced copies of patterns by hand in order to share. The pattern collecting Round Robins of the 1950s-1960s is a great example of how early collectors managed to identify patterns.

Some of our Quilting Foremothers as Quilt Historians, Pattern Designers and Pattern Archivists

(click on each highlighted name below for more information)

Although the first book dedicated solely to quilt history written by Marie D. Webster was published in 1915, there were a limited number of quilts or patterns illustrated….but it was a beginning.  It has been re-published by her granddaughter Rosalind Webster Perry. I highly recommend this new version because Rosalind added color photos as well as Marie's own story. Also, Rosalind has published two books of Marie Webster patterns with the help of Marti Frolli. If you are interested in learning more about the great impact Marie Webster designs had upon American appliqué, you need Rosalind's two books in your library: A Joy Forever: Marie Webster's Quilt Patterns and Marie Webster's Garden of Quilts.

A second book on quilt history by Ruth E. Finley in 1929 also had a limited number of photos and designs.  (You can read additional material about Ruth Finley in my 2009 article for TQS by clicking on Ruth Finley's name in large bold letters above.)

Some might argue, therefore, that the first extensive index of quilt patterns in hardback* was Ruby Short McKim's One Hundred and One Patchwork Patterns. Fortunately, two of McKim's granddaughter's have launched a wonderful new website McKim Studios and are in the process of republishing all of Ruby's patterns. I personally like Ruby's series quilts. 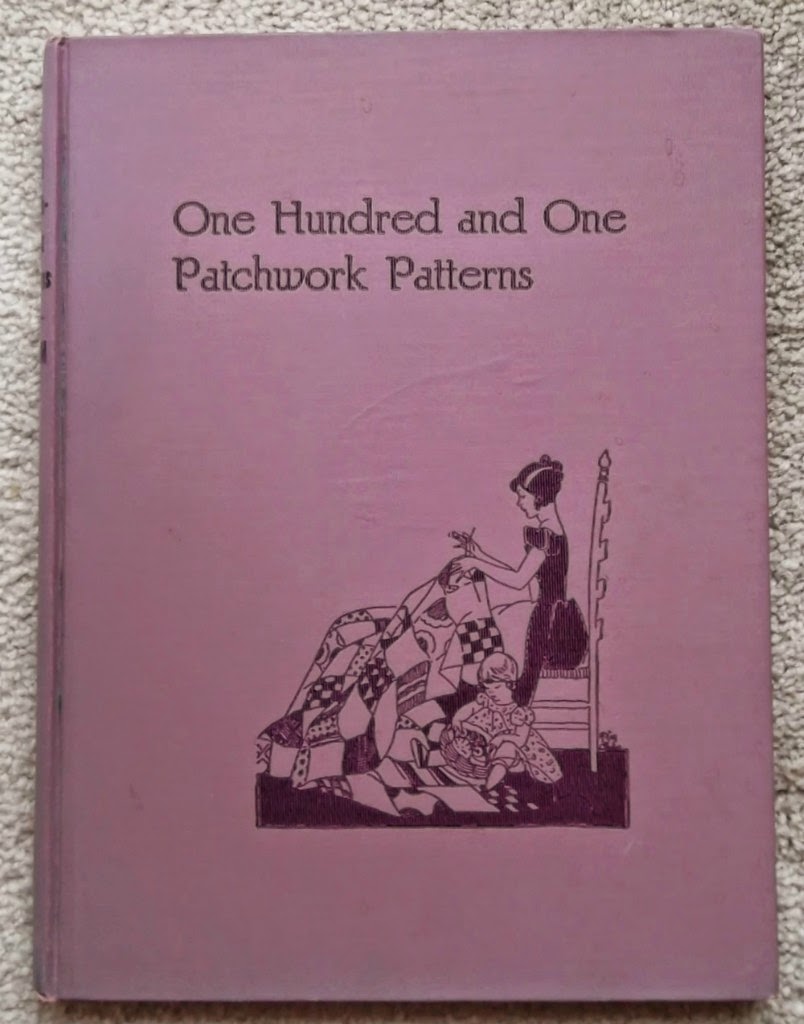 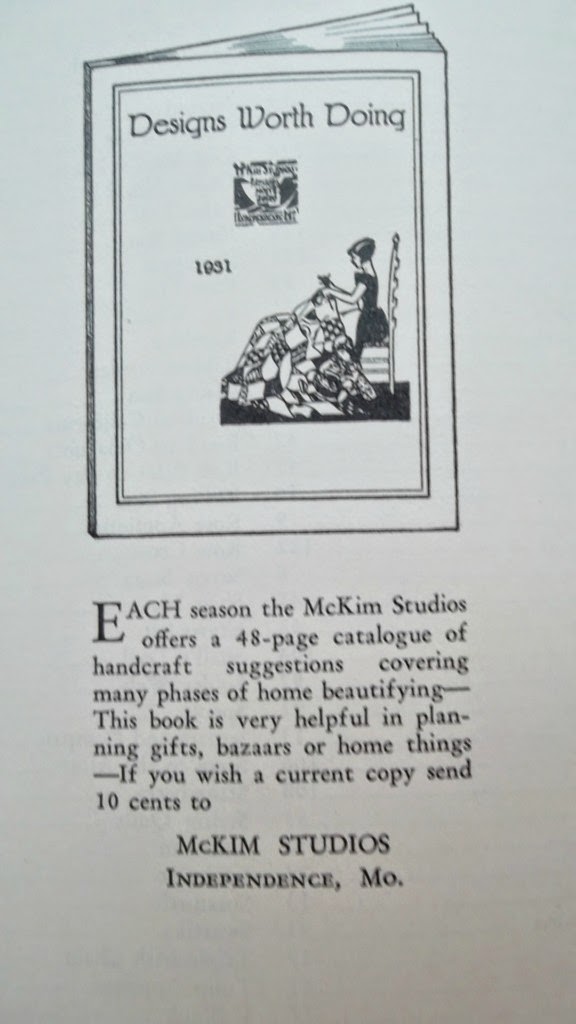 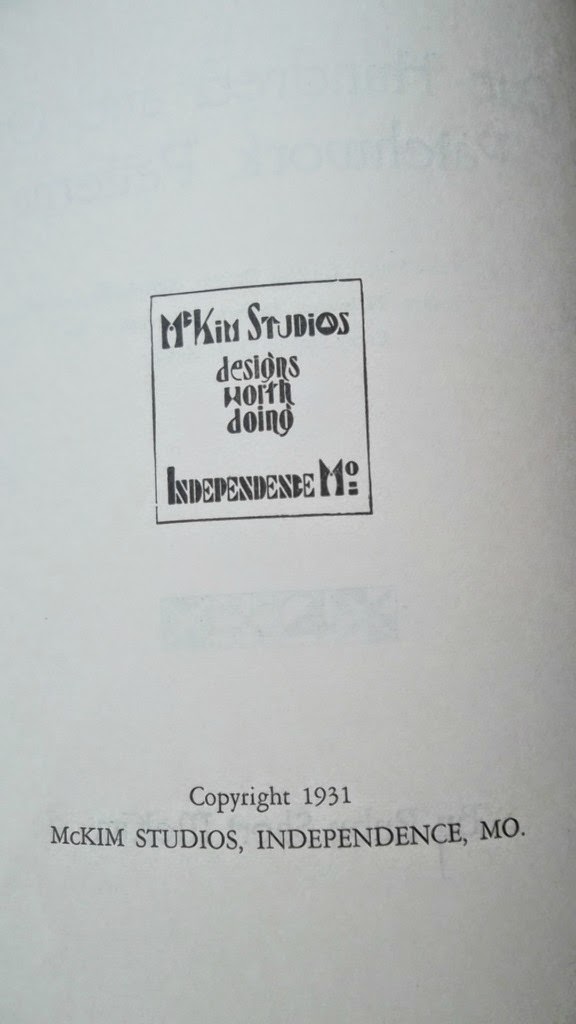 Ruby Short McKim was one of the earliest syndicated quilt pattern columnists who went by her real name and was well known to her followers -- if not the earliest. She was one go-getter kind of woman as well as a talented designer. Her patterns continue to be made into new quilts every decade. 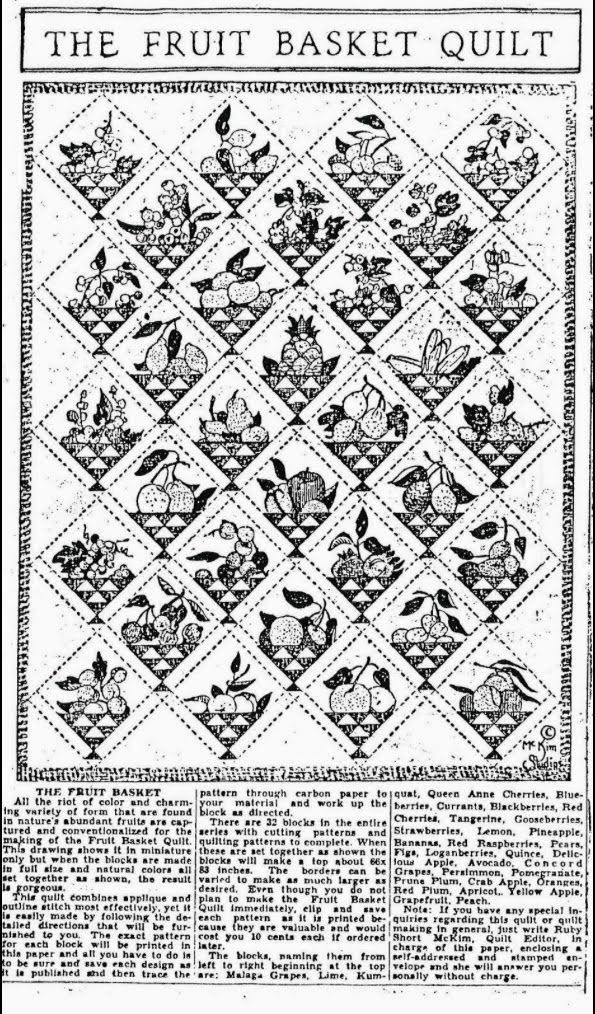 Carrie A. Hall and Rose G. Kretsinger's book The Romance of the Patchwork Quilt in America published in 1935 by Caxton Printers, Ltd., Caldwell, Idaho was next. Another excellent article on Rose Kretsinger.

The next big jump in quilt pattern identification was Barbara Brackman's Encyclopedia of Pieced Quilt Patterns begun with her own limited release of a series of books first printed in 1979 and bound together by those old fashioned 2-pronged metal hinges. I have a Second Edition set of this series she published in 1981. 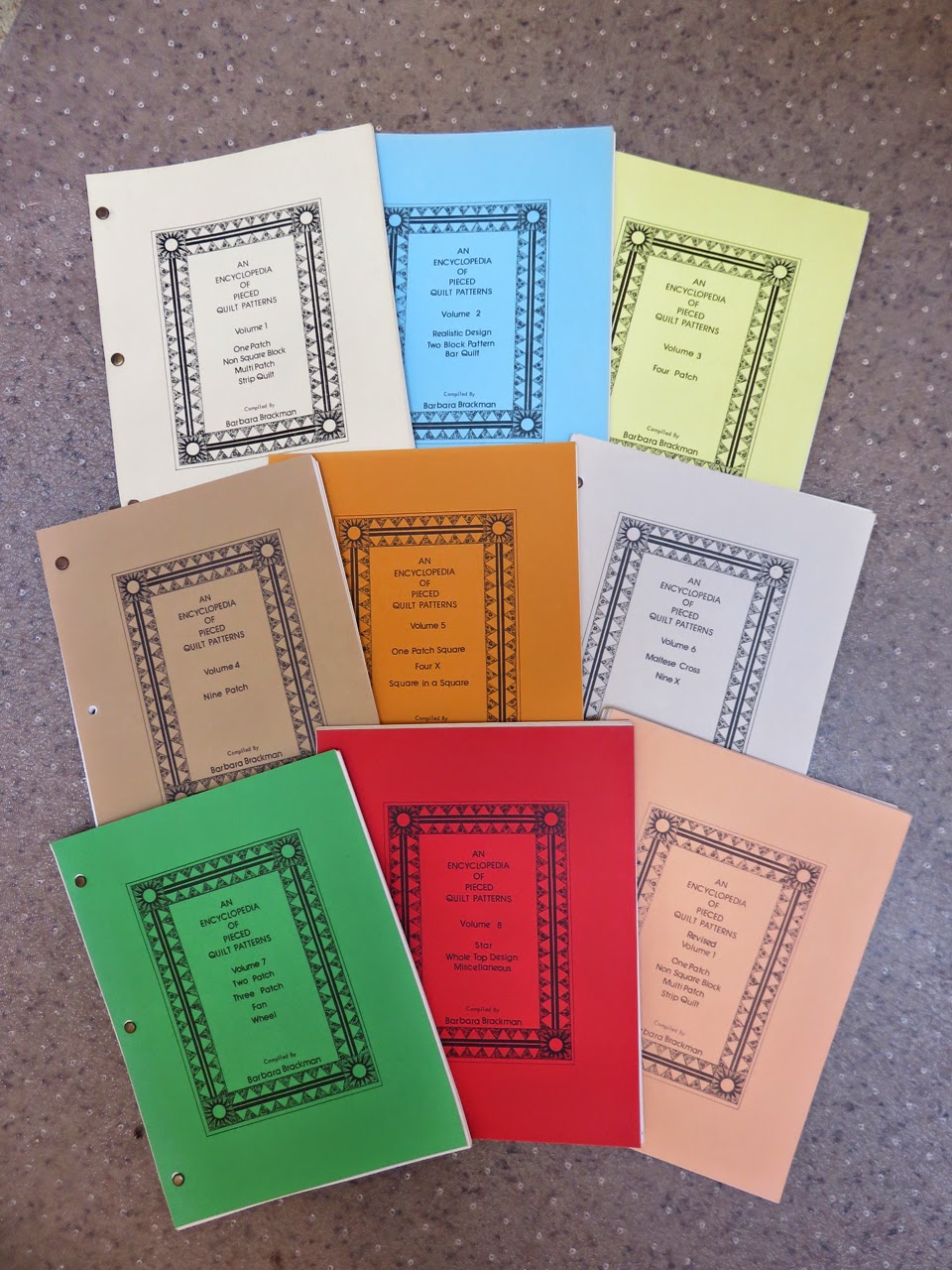 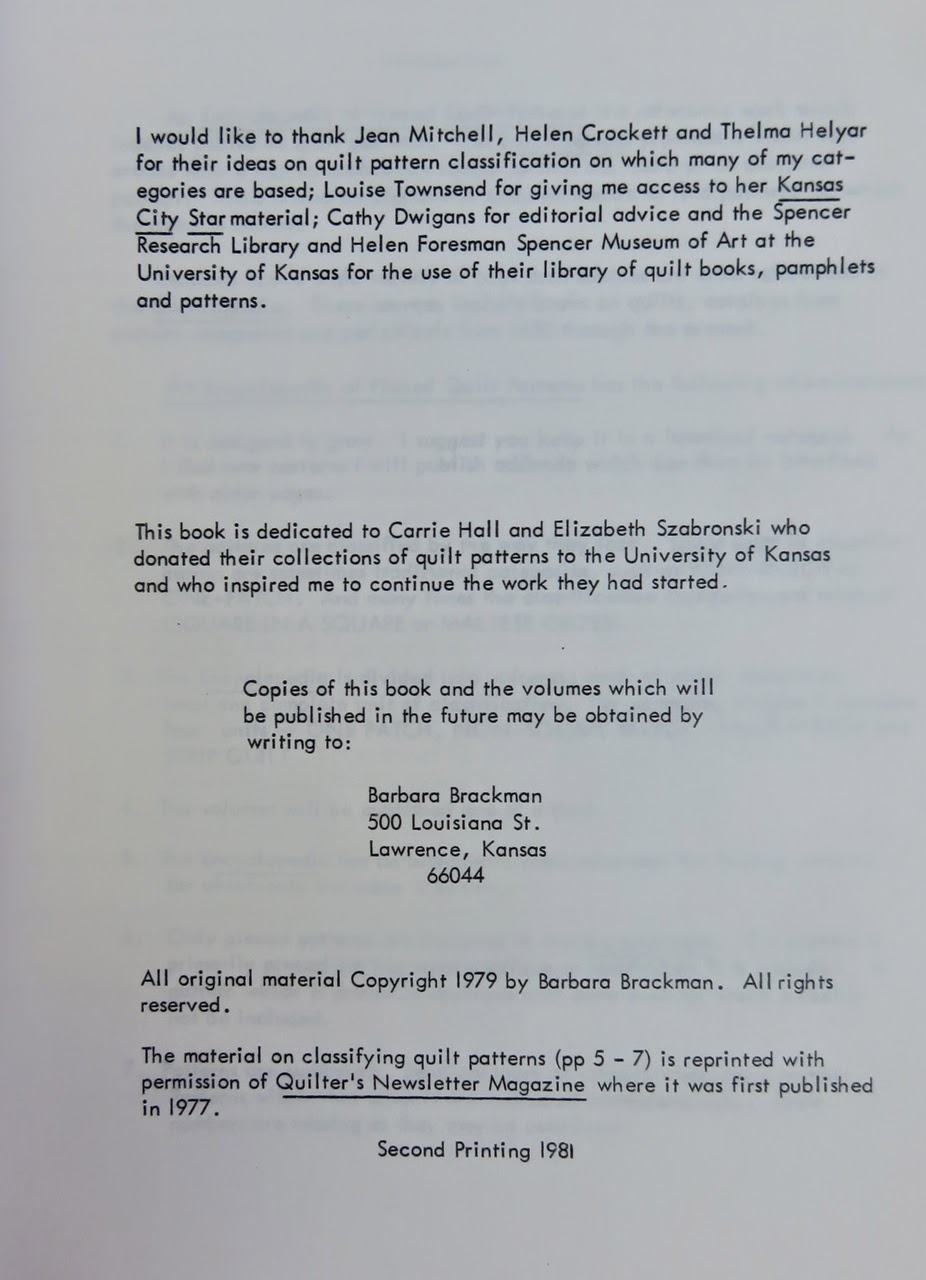 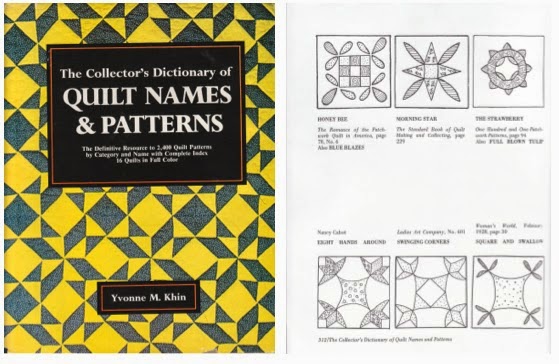 Another pattern indexing book (above) that followed shortly after Brackman's first printing of her self-published series was  The Collector's Dictionary of Quilt Names & Patterns written by Yvonne M. Khin, (1980 by Acropolis Books Limited, Washington, D.C.)  It's subtitle: "The Definitive Resource to 2,400 Quilt Patterns by Category and Name with Complete Index." I didn't hear about Khin's book for some reason until long after I heard about Barbara Brackman's series. 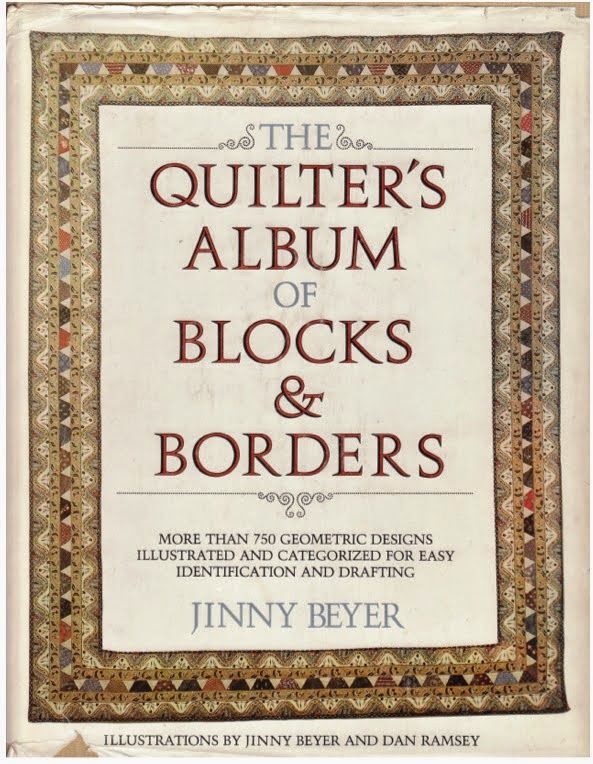 In 1983 Jinny Beyer came out with her book The Quilter's Album  of Blocks & Borders, published by EPM of McLean, Virginia.  One of the leading quilt teachers in the late 20th century quilt renaissance, Jinny is even covered in the Encyclopedia Britannica. Jinny also had an enormous impact on quilt makers as a result of her pioneer work in fabric design with RJR Fabrics. She set the pace for all to follow in fabrics designed specifically with quilters in mind. To see a video interview of Jinny, visit TQS Quilting Legends here. 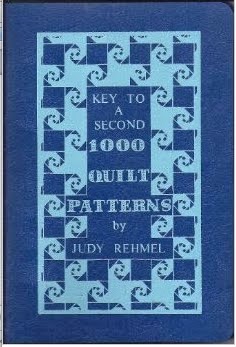 Her book below was published in 1986. 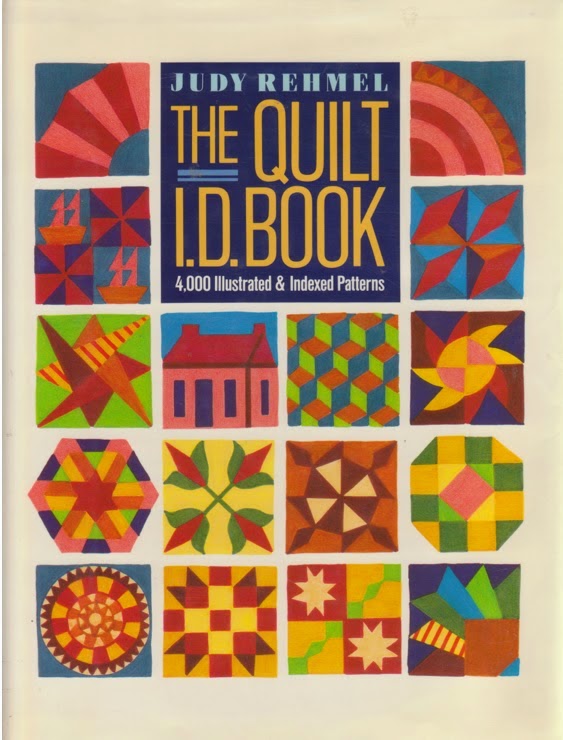 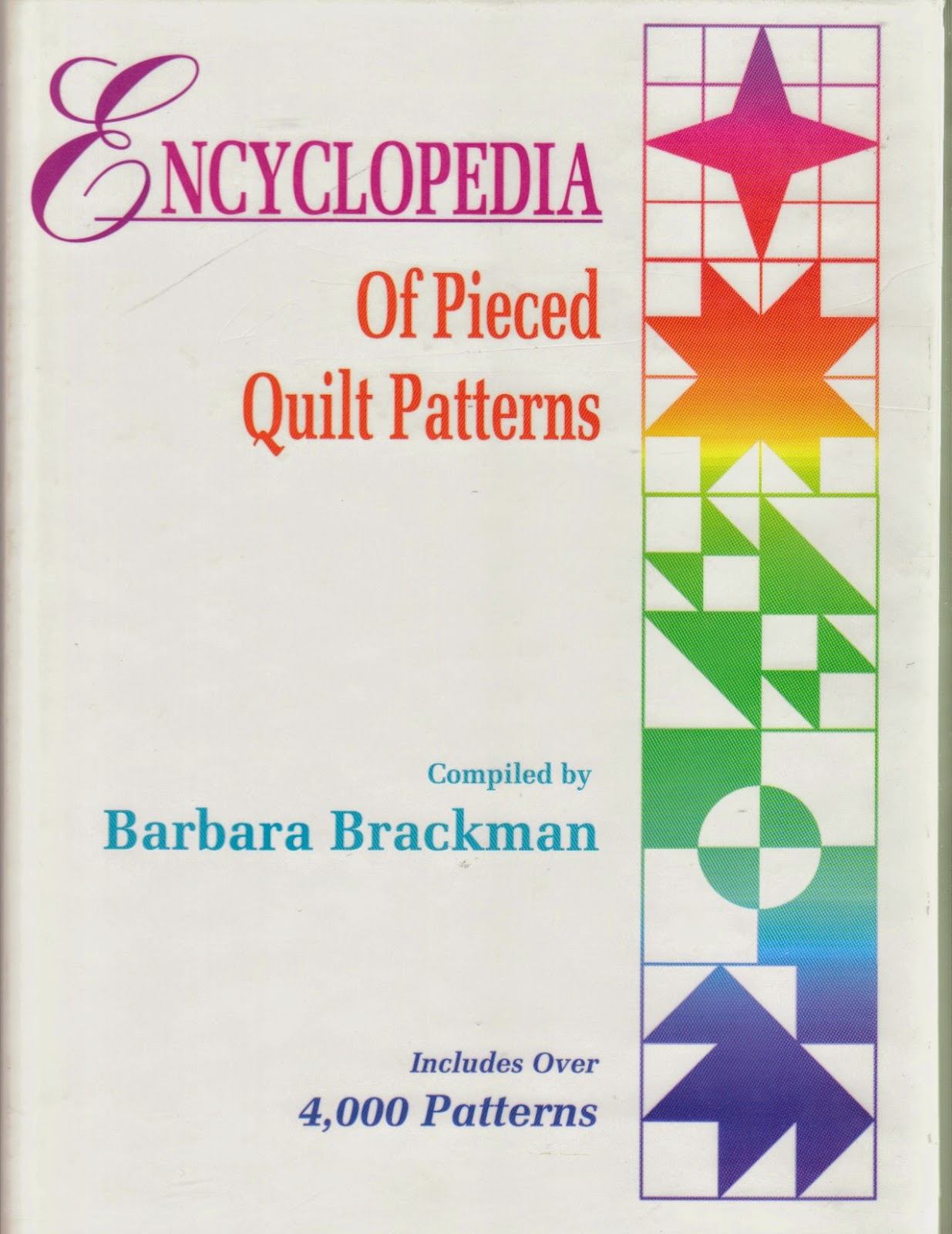 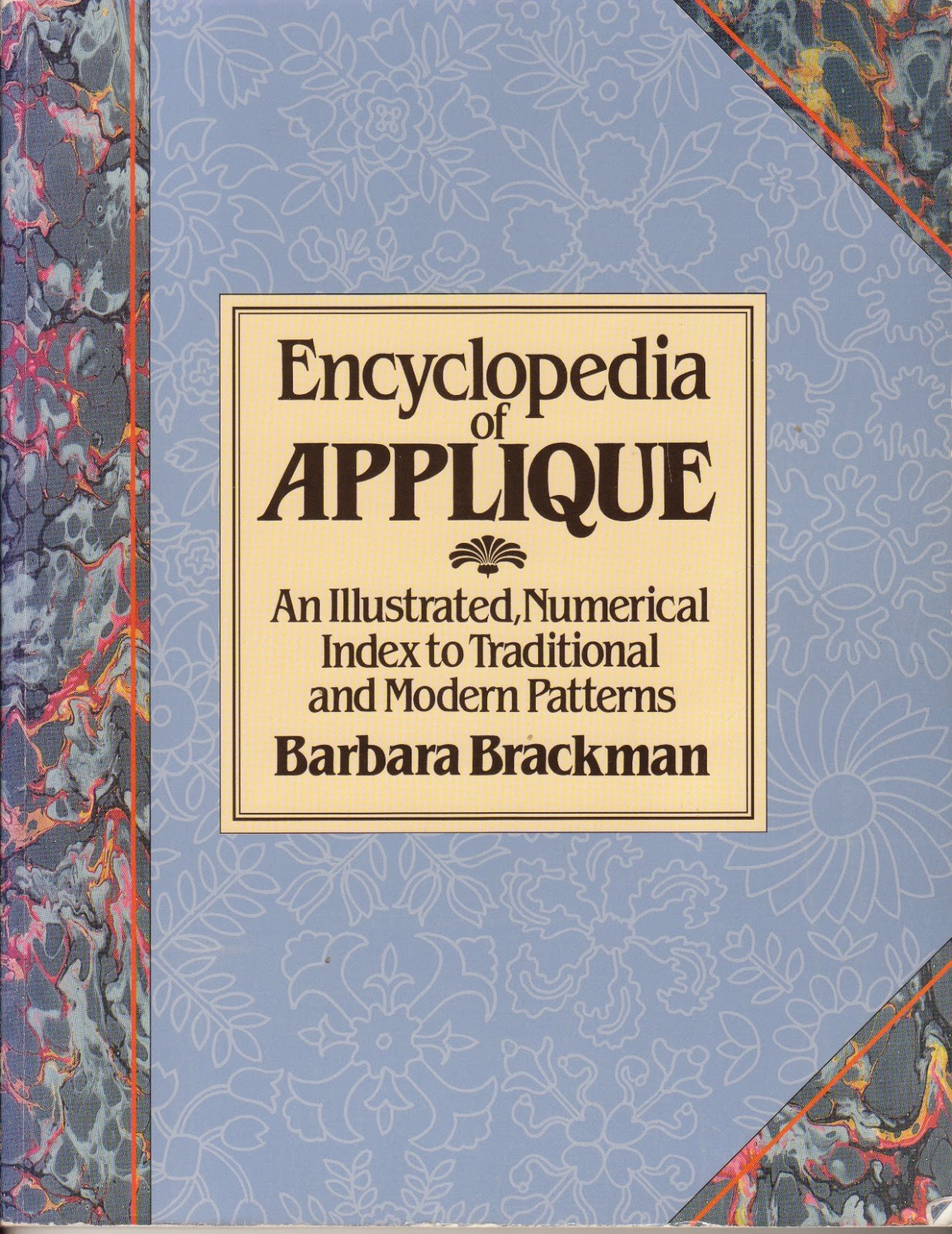 The latest addition to the documentation of American quilt patterns is perhaps the most comprehensive of all, Rose Lee Alboum's The American Legacy Quilt Index Series. Please do take the time to check this out. Odering is on hold for a short time as Rose moves into her new studio, but she'll be up and running soon and taking orders again.

I first met Rose Alboum via eBay. We were bidding on the same two sets of early 20th newspaper clippings of syndicated newspaper quilt patterns. At that time eBay clearly listed the other bidders contact information and it was possible to directly contact another bidder before the sale was over. We began conversing and decided to share the sets we had each won by making xerox copies for each other. Later I would meet Rose face to face at her first AQSG meeting. I think it must have been about 2006 or 2007 when AQSG was meeting in one of the New England States. Her efforts at indexing her "great American quilt book"  (as in "Great American Song Book," which my music historian husband introduced me to)  have been remarkable.  I encourage you to explore Rose's website. She has indexed an incredible number of 20th century quilt patterns as well as later 19th century quilt patterns.


How Do You Indentify the Quilts in Your Collection?

Today there are thousands of photos of vintage and antique quilts on the Internet. Any one of these books is helpful in identifying the pattern of a quilt you may have purchased. Meanwhile, quilt historians have a lot of work to do to create an encyclopedia of patterns created since the 1970s!

If you have other books you think should be added to this list, please share in the comments below or send me an email.

Here's to the dedicated researchers and archivists among us!

* I emphasize hardback book because Ladies Art company came out with sales catalogues in the late 1890s that were the pattern encyclopedias of that day.