Was there ever a life before Quilting?


If you click on the link above, you'll see the first article I wrote for my grandkids about my life before marriage. Only I called it "was there ever a life before quilting?" because they pretty much know me as a quilt collector and historian, not someone who lived overseas twice as a teenager.

Now speed forward to 1972. College behind me, married and three small children. I gotta get some breathing room so I decide to volunteer where there are some adults ...and kids.... around. 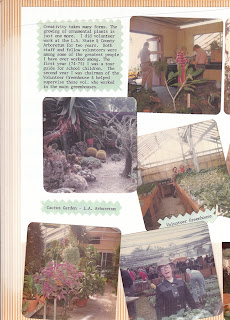 I'll take a shortcut and scan some pages from my "history of my creative efforts" album.

I found the perfect place across from the Santa Anita Race Track — the Los Angeles State/County Arboretum! One year I supervised their volunteer greenhouses; another year I lead school groups on nature tours of the Arboretum and taught a very basic botany class. In the photo below I am helping set up for the annual plant sale. 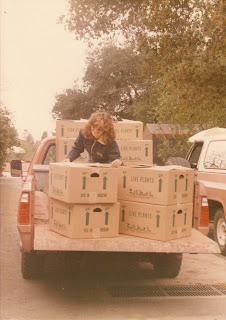 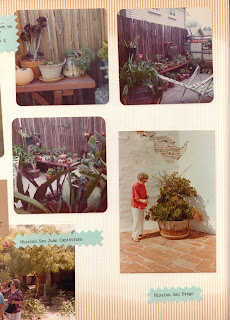 I also began to collect succulent plants myself. (My mother is in red.)

Quilting didn't come about until I moved from Pasadena to the Richmond, Virginia area. I began my first quilt in 1980—a Sampler quilt. Didn't every new quilter in the 80s begin with a Quilt-As-You-Go Sampler class? Can you imagine a future generation eagerly adding these to their collections as a representative of our era?  Well, they are already showing up on eBay....and reflecting varying degrees of competence.

I for one didn't know much about color value or contrast yet. 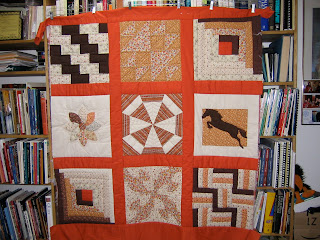 Then, when I quilted it, unbeknownst to me, some of the blocks became smaller as I quilted. When I tried to add the sashing, I was in trouble. Things didn't come together too well.  (See the open seam below next to the orange sashing on the bottom strip.) I have already added little tiny extra pieces in some areas in order to make things fit. I discovered I had overlooked one when I photographed the quilt recently. It also needs the final border. Plus all the sashing needs to be quilted. 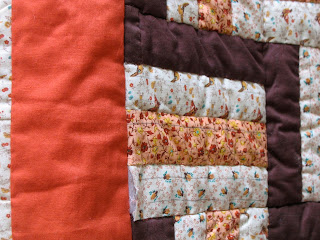 After this quilt was started, I made a lot of small wall hangings. Many of my smaller items I sold or gave away in the 1980s. This is one of the ones I gave away to a dear friend. I think most of these fabrics are from the earliest line of Jinny Beyer fabrics. 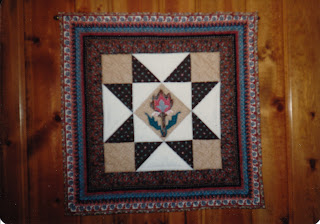 I very quickly discovered that I really did enjoy handwork, i.e. hand applique and handquilting.  Here is an example of my one piece of stuffed work or trapunto as some might call it.  Only the bird is actually stuffed from behind. 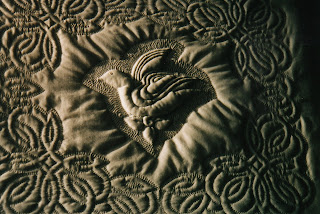 I don't recall how I actually came by the dove pattern at the time.  Two years ago, however, I discovered that Jinny Avery had included this same dove pattern in one of her early magazine articles from the late 1970s. Ruby McKim also featured it in her 101 Patchwork Patterns book, ca 1930. 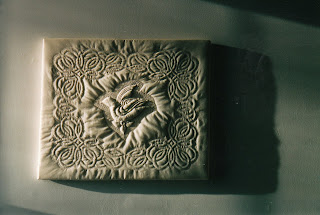 My 2nd "real quilt" (not a wall hanging) was begun in 1982.  It was needle turn applique based on the folded paper pattern method. I got the oak leaf pattern idea from a quilt I saw at the Abby Aldrich Rockefeller Folk Art Museum in Williamsburg. The rest of them I just folded, sketched on the 1/8 triangular folded paper and cut.

I quickly discovered I preferred applique to piecing. About this time we moved from Virginia to New Orleans and I went to work fulltime in convention planning. Actual quilt making then languished for several years although I did join a local guild and won the naming contest for their regional newsletter. And I continued to study quilt history, of course! 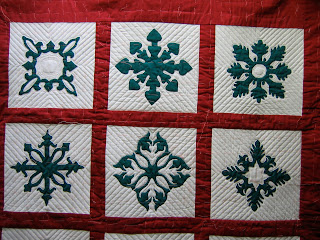 This 2nd quilt is still not quite done and I don't have a full photo of it either. However, I did bring it out on September 11, 2001 and began quilting furiously for several weeks trying to calm myself. There was so much chaos and confusion and anger in the D.C. area where we then lived following the terrorist attacks. And then only a year later (or was it two?), we had the mysterious sniper to contend with for several weeks - or was it several months before they caught him? It was one of the most unsettling periods of my life as an American citizen. I was living in East Africa when Kennedy was assassinated and shortly thereafter survived an attempted coup d'état in Dar-es-Salaam. On September 11, 2001, I thought, "Well, international terrorism has finally caught up with the US, too. It's not enough that we have our own occasional home-grown terrorist attacks."

This quilt, too, needs the sashing and final border quilted. 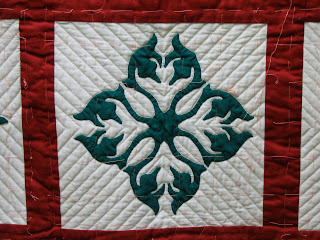 What is it with me and final borders! 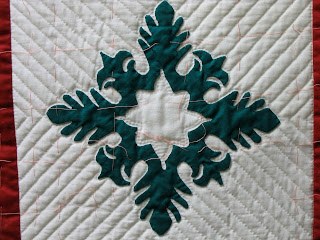 My 1st finished "bed-useable" quilt was a baby quilt for a cousin's first child but I cannot find a photo of it. There was a deadline involved so I got it done! I mailed it off in 1986 or 1987.

My next "finished" quilt was also a baby quilt.

The only granddaughter to date got me stitching again in 2002!

My next "finished" quilt was for my only granddaughter, Marleigh Elizabeth, who was born in November 2002 and named Elizabeth after my mother and me and Gary's sister Marlee. Once again a firm deadline was my motivator.

First came the quilt. We were spending 8 weeks here on the island that summer so I took that opportunity to take a quilting class at the Enchanted Needle here on Lopez. (See my story about this quilt shop on my other blog by clicking here.)

That summer I really focused on the completion of the quilt top in what was a short window of time for me. Then I had a longarm quilter here on the island quilt it before we returned to Virginia....the husband of one of my quilt friends. He bought the longarm for his wife but, after trying it, she decided she was too small to handle the machine.  All this is documented on the back of the quilt. 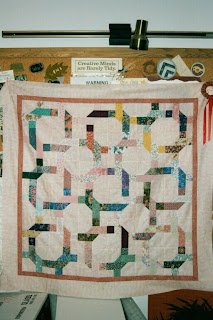 After Marleigh was born, I made her a small wall hanging birth-announcement, again while we were at the island house.  I began with an already made block I found in my mother-in-law's sewing room.

Wini Alexander is the one who got me into needlework in the first place. When she died in 1999, I inherited all her quilts and everything in her sewing room. So I took Wini's block and added to it. In this way, this small quilt came from both of us. 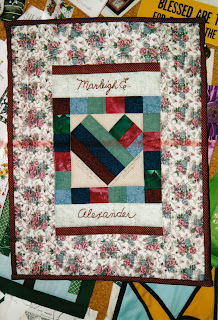 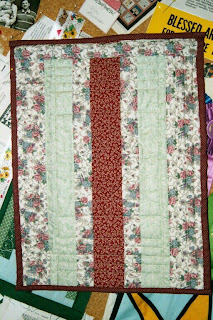 I hand embroidered Marleigh's name on the quilt but used a Micron pen to add her birthdate etc. It is machine quilted...a first for me.

Marleigh on Her Finished Quilt 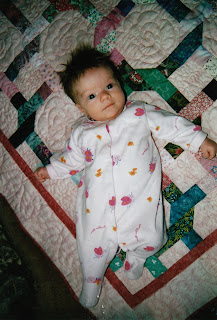 In June I finished my first quilt in 9 years -- a small Eagle quilt -- and I owe it all to Susan Wildemuth, a fellow member of the American Quilt Study Group. More on AQSG later. Meanwhile, my Eagle story will appear in another blog post ....soon?  But I already began to write about my 1876 Centennial Quilt Project here. Now this quilt was the challenge of a lifetime! 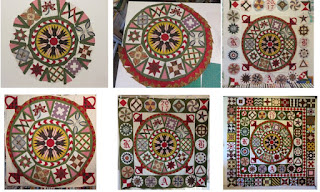