The Beautiful Needlwork of the Miao


I have selected just a few of the 500 some photos I took while on a trip to China in 1996. I tried to capture needlework, children and faces most of all, as well as people at work. Today I will begin sharing some of the needlework and folkart I photographed. 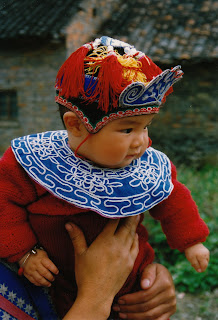 Mother and child from Dragon Back Village on the outskirts of Guiyang. Hats have a very special meaning among the Miao, especially the hats the babies wear for their hats are for protection from bad spirits as well as to bring them good luck.

Of the three spring festivals that we "attended", only the 3rd one (the Sister's Meal Festival in Shidong) was actually taking place in "real" time. The other two had already had their spring festivals and were simply being paid to "re-enact' parts of it for us.

It was at the 2nd village (Langde) that I actually saw a number of women standing around the edge of the crowd with needlework in their hands stitching away. This was very exciting indeed! 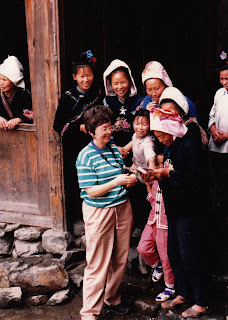 It was also in Langde that my photos of my pregnant daughter-in-law and my daughter in her bridal dress created such a stir among the women.
(Click on the photo to enlarge it so that you can see the details on their clothing and the scarves on their heads. These are what I came to call the "towel" scarves.)


I will share the photos of the women of Langde stitching as well as the costumes of that particular Miao people in my next report.

Meanwhile, I have given you some reading resources at the end of this blog if you are interested in learning more about the Hmong and Miao people as well as other minority groups in that area of the world. They seem to do a precarious balancing act of maintaining their own ways within the larger Han culture of China. It also should be noted that, according to Mark E. Pfeifer, PhD, Director, Hmong Resource Center, Saint Paul, MN, "studies of Miao in China sometimes but do not always refer to Hmong. Hmong are one of at least four major ethnic groups classified as Miao in China. Others groups include the Kho Xiong, the Hmu and the A Hmao."


I have only read reviews of the books listed below, not the actual books themselves, although I now have three on order. The last two books on the list have some very interesting comments by Hmong people now living in the USA. You can see by their comments that even among themselves, they do not agree on what the name "Hmong" means. Some even resent the use of the word "Miao". Trying to study another culture, especially one that has undergone as much disruption as the ethnic minorities of Southeast Asia and Southwestern and Northwestern China is always a very complex challenge. 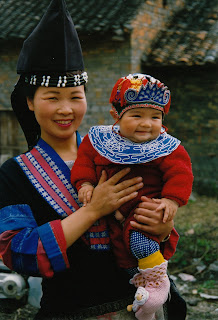 In one article I read George J. Leonard writes that the Chinese created some 55-70 categories for the Hmong/Miao people and required them to wear certain costumes so as to segregate them and easily tell them apart. There are many sub-groups generally named after hair styles or their regional costumes.

According to Leonard, the Hmong still use this system today. Here is a short list from a couple different sources: Blue Hmong, White Hmong, Striped Hmong, the Four Seals Miao, Flower Miao, the Side-Comb Miao, Short Skirt Miao, Wengxian Miao (well known for their decorated pieces of folded ribbon), the Biasha Miao. I recommend this link to Leonard's long article on the Hmong Story Cloths as well as his other articles on various aspects of Chinese culture. 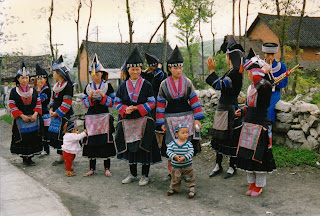 It is a tradtion to take a sip of rice wine before entering the village at festival time. If you don't really want to partake, then you extend a simple courtesy bow and move on. However, I figured nothing could survive in alchohol so potent, so I took a little tiny sip. Whew! Potent stuff indeed! 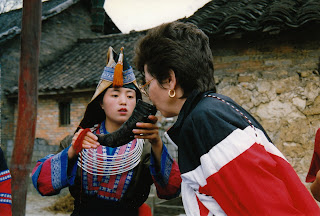 Their pleated skirts are perfect for dancing! 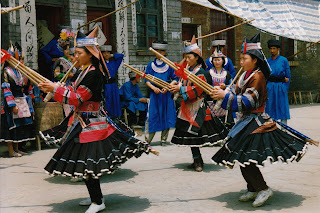 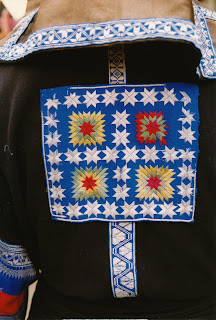 This one is now missing a few stitches. It sure would be interesting to have been able to ask more detailed questions, but with only one translator available, it was hard to get much information. 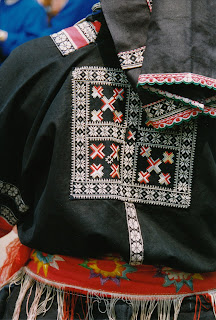 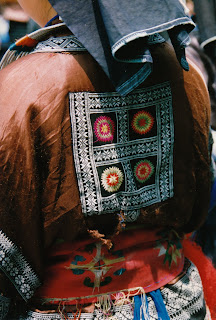 The color contrast is brilliant.

(Click on a photograph and you can enjoy more detail.)


While taking the train from Guiyang to Kaili the next day, our group encountered two Miao women headed for Kaili also. We were drawn to their hair-do and head bands and asked to take photos. 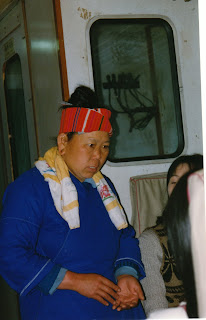 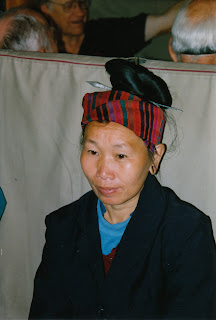 Within minutes, they left and came hurrying back with two huge backpacks full of antique textiles. These were the first we had seen and we all got very excited. Bargaining began in ernest.

Then a conductor discovered what the two entrepreneurs were up to and put a stop to it. We had not realized that buying and selling was not allowed on the trains!


Apparently everything about the way the Miao dress, wear their hair or wrap a scarf has meaning and helps identify which village or tribe each belongs to. These two particular women are wearing what I perceived as more traidtional head wraps. However, in some villages the women appear to now be using colorful factory made terrycloth towels in the place of their traditional handwoven or handworked scarves.


Here are a couple of the baby hats they had in their stash. 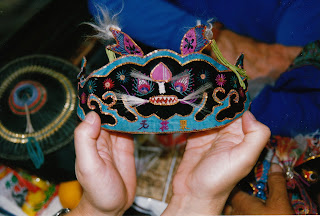 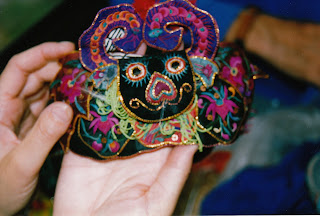 
The various hats we saw in all villages have special meaning. I wish I could explain each one to you, but that is a daunting task to research. I do know it is especially important that babies wear certain types of hats to protect them from bad spirits or to bring them good luck. Here is one website where you will find interesting information about the Miao needlework. How reliable the information is, I do not know. I have discovered in my short exploration of this subject that there are many conflicting opinions within this field. 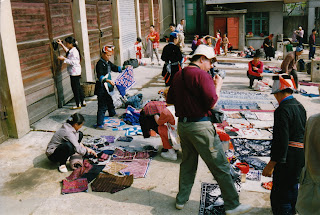 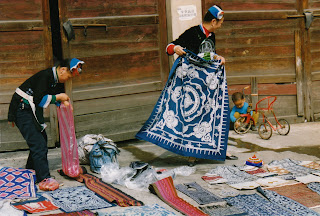 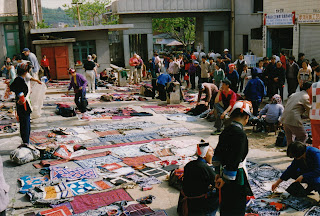 This is the antique textile market our two new friends from the train were hurrying to once they got off the train. We accidentally stumbled upon the market later in the day and were thrilled to have the opportunity to browse and shop more... At least we women were. 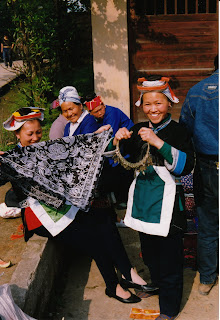 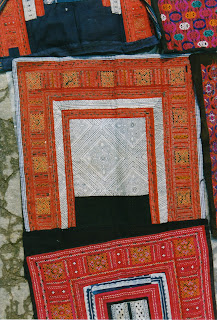 Here is a link to a book on textiles of the Miao people.

The study of the origin of the terms "Miao" or "Hmong" can be pretty daunting for the lay person.


...the term 'Miao" appeared in the Chinese Classics and early historical records such as the 'Zhanguo ce' ("Intrigues of the Warring States") and the "Shiji' ("Records of the Historians).   After the Han Dynasty in 220 A.D., "Miao" disappeared from historical records until the Song Dynasty (A.D. 947-1279). The reason for the mysterious disappearance remains unclear. Scholars seem to agree that the Hmong had gone through numerous dreadful periods in history in which the term 'Miao" also underwent some changes....Whether the ancient Miao are today's Miao is debatable among scholars. How did the term "Miao' or 'Hmong" come into being? Although the term 'Miao" appeared in Chinese historical records, the term 'Hmong' never did. What did they call themselves back then, "Hmong or 'Miao?'. The answer to this question varied from region to region."


Read my first China post below and stay tuned for more photos of the women and their needlework!

Interesting article about Miao immigration patterns within the USA - http://immigrationtounitedstates.org/551-hmong-immigrants.html

I have only read reviews of these books not the actual books themselves. The last two books on the list have some very interesting comments by Hmong people now living in the USA. I found all of these titles via amazon.com.

(1) Miao Textiles from China (Fabric Folios)
by Gina Corrigan.
Gina Corrigan has been visting the country regularly since 1973 and during this time has developed a special interest in researching and collecting Miao textiles. She recently organized a fascinating BP showcase exhibition of these with the British Museum. She is author and photographer of the Odyssey Illustrated Guide to Guizhou and lives in Sussex. 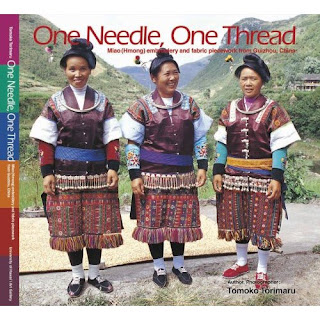 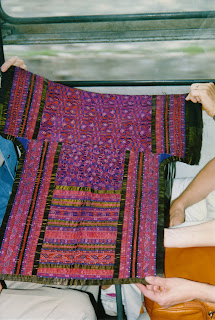 (One of the pieces someone in our group bought on the train to Kaili.)


(5) Calling In The Soul: Gender And The Cycle Of Life In A Hmong Village
~ Patricia V. Symonds (Author)

(6) The Asian Pacific American Heritage: A Companion to Literature and Arts (Garland Reference Library of the Humanities)
By George Leonard 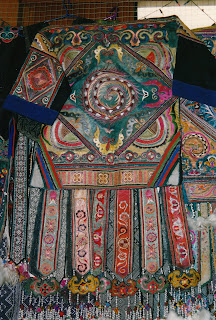 (Early Miao festival jacket as seen while I was in Southwestern China in 1996.)

(10) Hmong in Minnesota (People of Minnesota)
by Chia Vang 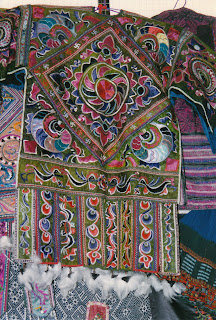 (Another festival jacket I captured on film in 1996.)