Look for Clues in the Fabric and the Costume 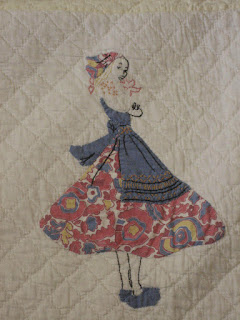 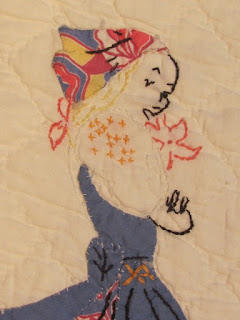 I have been trying to find a source for the above pattern since I acquired the quilt in November 2012 but with no luck to date. Based on the fabrics in the dresses, my guess is the quilt dates to the 1940s or possibly the very late 30s.

The embroidery details on the aprons and at times even on the blouses speak to me of someone very familiar with ethnic costumes of the Germanic peoples of Europe. Many European countries displayed elaborate embroidered detail on women's ethnic costumes and many wore kerchiefs. So how do I narrow down the ethnic origin? 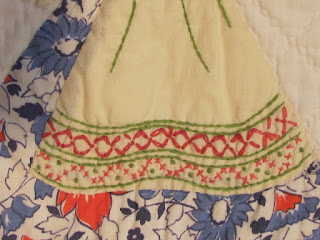 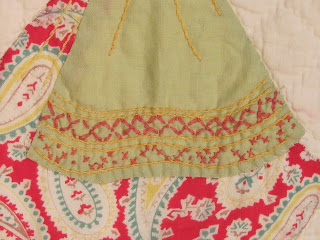 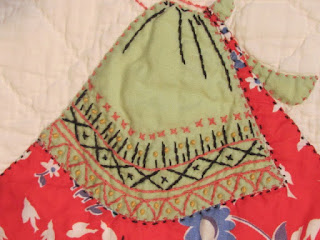 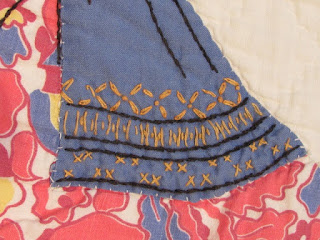 What was the vague familiarity of this quilt?

My first thought was that it reminded me of a Mary Gasperik Quilt. WOW! This would be very exciting indeed if this was a "lost" Gasperik quilt!  Mariska (Mary) Mihalovits was born in Hungary in 1888 and came to America at the age of 16, where she settled in Chicago within the Hungarian community and eventually married fellow Hungarian Stephen Gasperik. Mary didn't encounter quilts until 1933 at the Century of Progress Exposition in Chicago at age 45. She was immediately smitten and upon returning home joined a local club where she began to apply her considerable needlework skills to the making of quilts, unique quilts which often reflected her Hungarian heritage. And she often made up her own designs. These quilts can now be seen in the Quilt Index.

But, alas, the women on Gasperik's "Hungarian Harvest Festival" quilt were very different from those on my quilt. The women on my quilt are taller and more slender.  Even more important, Mary Gasperik's needlework was far superior to the needlework on this quilt.

On that point Sally Ambrose (another AQSG member) wrote: "Another thought is that these were original interpretations of the dolls made in the time frame.  It would not be difficult for an accomplished, imaginative artist to sketch these designs.  The rendition and construction fall in line with original design work."

I have to agree with Sally that this could well be an original pattern but I will continue to hunt for a possible commercial one.  Meanwhile, I had a lot of fun trying to track down the dress design itself.


So how do I tell which Germanic country this costume best represents?

One of my greatest challenges when researching and writing for someone else is to stay focused on the subject I started to write about and not get distracted by what I stumble across along the way. But when I write for my own blog, I can indulge in meandering as long as I can somehow tie it in to the story. So I am going to be sharing a few side adventures with you here. 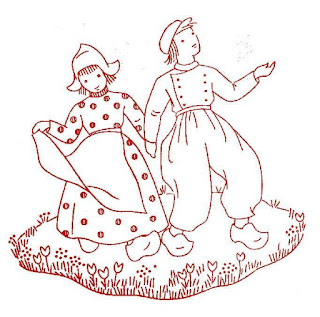 What most Americans know as "Dutch" actually came out of the "Pennsylvania Dutch" community, i.e the German community, not Dutch at all as in "the Dutch of Holland who settled Manhattan Island." The two designs you see here will be very familiar to those who grew up in the 40s and 50s and you can still find reproductions of it on eBay today. 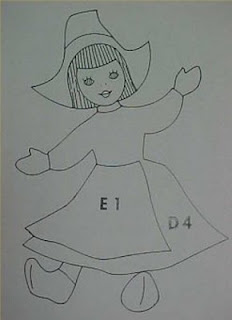 I had no idea how far afield my research of this pattern would take me! Old Dutch cleanser?

Clues in the Shoes 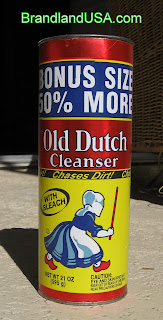 In my quilt, the dress design and the shoes are my two most helpful clues. The hat doesn't match Old Dutch at all, though. My young ladies are wearing kerchiefs, not the iconic "Dutch" hats seen above. But they do look to be wearing the typical Dutch wooden clogs we are all familiar with, thanks to the Dutch cleanser logo, one of the most recognizable trademarks of the early 20th century consumer product era. And so my side adventure began.

According to the U.S. Patent and Trademark Office, a trademark for Old Dutch was filed September 15, 1905 and registered March 27, 1906.  I well remember this canister sitting around out home throughout my childhood but I had no idea what "ingredients" it contained. Do you know? And why did it fade from popularity? Check it out.

How do they compare? 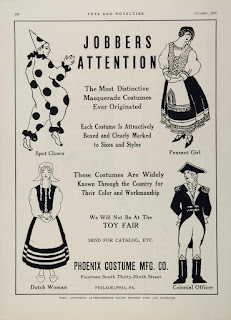 In spite of the shoes, by now I am really questioning whether my young ladies are Dutch. Maybe they are Austrian or Hungarian. Or maybe even Czech? The above ad carries a "popular" interpretation of both the iconic "Holland Dutch" girl and the iconic "Germanic" peasant girl. Both dresses appear to be variations of a dirndle. 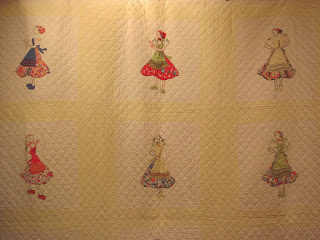 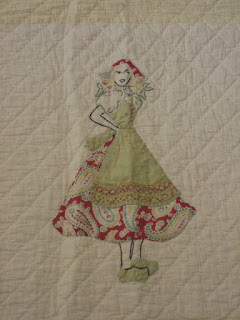 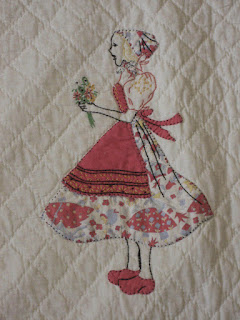 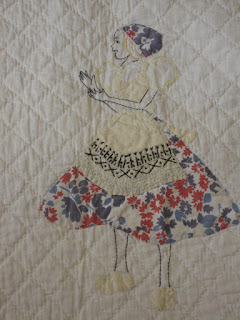 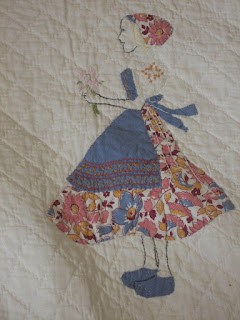 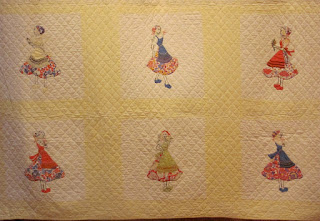 Another possible commercial design is suggested by a friend...

Quilt historian and folklorist Xenia Cord suggested that I check the article "Marion Cheever Whiteside Newton: Designer of Story Book Quilts, 1940-1965" by Naida Treadway Patterson in the 1995 AQSG issue of Uncoverings.  Fortunately, all thirty-three volumes of this incredible treasure trove of quilt and textile history sit right next to my desk for I had the good fortune to discover the American Quilt Study Group in 1981, the year after it was founded .

I quickly pulled my 1995 Uncoverings volume off my shelf and flipped to the special appendixes for the Patterson article found on pages 92-94. Here I found listed all of Newton's published pattern series as well as the list of completed Story Book Quilts that appeared in her Photo Log plus a list of additional pattern sketches. But I didn't find what I I was looking for.

I vividly remember when Patterson's paper on Marion Cheever Whiteside Newton was presented at the annual AQSG research seminar. The Seminar happened to be held in Paducah, Kentucky that year and it had been my first opportunity to visit the Museum of American Quilts, which resides in Paducah. The museum, which opened in 1991, underwent a name change in May 2008 when the U.S. Congress designated it The National Quilt Museum of the United States.

It was exciting to be in Paducah in 1995 and it's always exciting to attend an AQSG Seminar! But again I digress!

Some people call this patternn "Wedding Customs Around the World" but the designer, Marion C. W. Newton, called it simply "Bridal Quilt" when it appeared in Ladies Home Journal magazine February 1949.  (The Bridal Quilt does contain 13 blocks of wedding customs from around the world.) Check out more photos of Newton's Bridal Quilt on Stella Rubin's website. (It may have sold by the time you access this blog so don't be surprised if it is gone.)

Stella writes: "Weddings of the World quilt is a pattern created by Marion Cheever Whiteside Newton for her cottage industry, Story Book Quilts, in 1949. Newton is well known for her pictorial appliqued patterns. One of her quilts is in the collection of the Metropolitan Museum of Art. Newton drew upon her experience as an artist in creating her patterns. She was always scrupulous as to the accuracy of the clothing she depicted. Each of these examples shows 14 pairs of brides and grooms in native dress from all parts of the world."

Here is another version of that same Bridal Quilt in the Quilt Index but in blue. You can see it by clicking here. It actually resides in the New England Quilt Museum. CITATION: Bridal Quilt. (Maker not recorded). 1948-1951. From New England Quilt Museum, NEQM Permanent Collection (MassQuilts Documentation). Published inThe Quilt Index, http://www.quiltindex.org/fulldisplay.php?kid=21-41-BE. Accessed: 02/16/2013

An exhibition of 28 quilts designed by Marion Cheever Whiteside Newton from 1940 to 1965 was hung at the New England Museum in 1998. See New York Times reference here.  Four Newton pillows came up for auction on eBay in 2008.

Could the dress be a dirndl pattern?

So I decided it was time to check out dress patterns and costumes from Germanic countries more thoroughly.

The Dirndl According to Wikipedia...

The dirndl consists of a bodice, blouse, full skirt and apron. While appearing to be simple and plain, a properly made modern dirndl may be quite expensive as it is tailored and sometimes cut from costly hand-printed or silk fabrics. In the South German dialects (Bairisch), Dirndl originally referred to a young woman or a girl, and Dirndlgewand to the dress. Nowadays, Dirndl may equally refer to either a young woman or to the dress.

The dirndl originated as a more hardy form of the costume we have today; the uniform of Austrian servants in the 19th century (Dirndlgewand means "maid's dress"). Simple forms were also worn commonly by working women in plain colors or a simple check. The Austrian upper classes adopted the dirndl as high fashion in the 1870's. Today, dirndls vary from simple styles to exquisitely crafted, very expensive models. 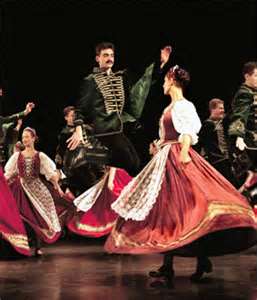 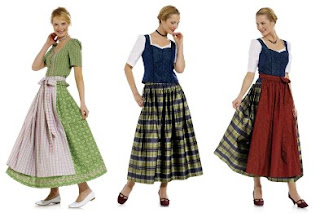 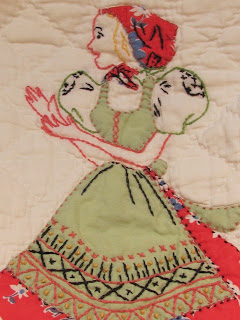 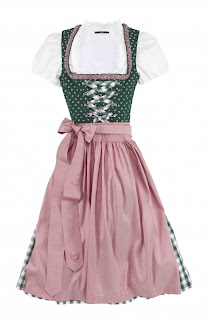 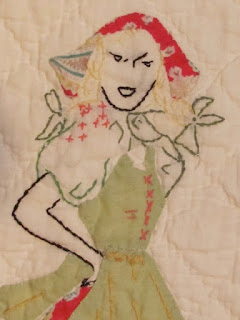 Remember, Headgear and Shoes can be Clues too! 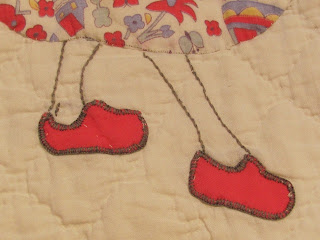 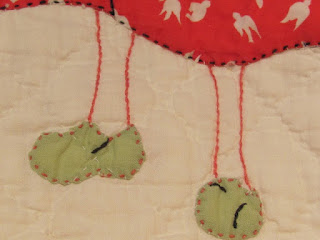 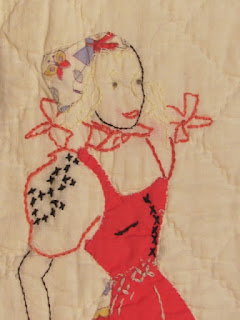 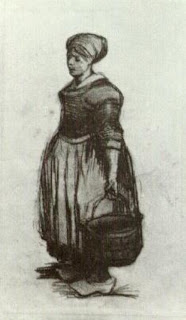 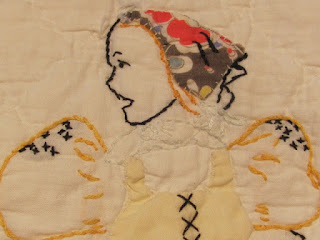 From Wikipedia: The "peasant genre" of the Realism movement began in the 1840s with the works of Jean-François Millet, Jules Breton, and others. Van Gogh described the works of Millet and Breton as having religious significance, "something on high," and described them as being the "voices of the wheat."  Click here for source. 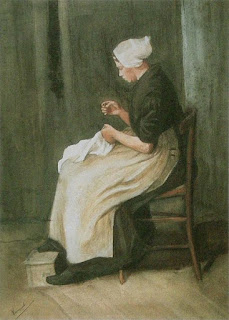 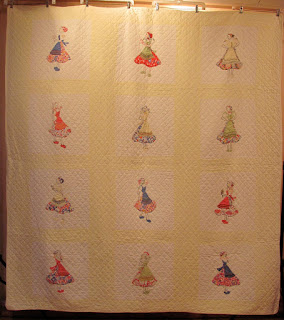 So, do I have any absolute answers as to the source of the pattern? No. But the search has been fascinating! It almost always is!

I hope you life is never boring! There is so much to explore and learn!

PS: And just to end with a smile, how about a modern version? I don't think they could have gotten any work done in those shoes, though,  do you? 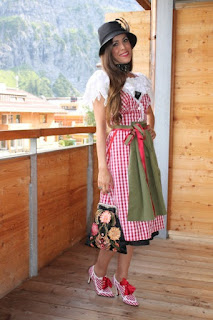 I welcome your comments and reflections on this post!

PLEASE, do not copy this pattern without my written permission and even then, no commercial duplication of it!

UDATE: An acquaintance alerted me to two books by Kathleen Mann:  Peasant Costume in Europe Book I (published in 1937) and book II (published in 1938).  As soon as I saw a few pages from this book I recognized it as having been in my family home as I was growing up. Below is a Hungarian couple from the book.