An Unusal Find: A Signature Plate 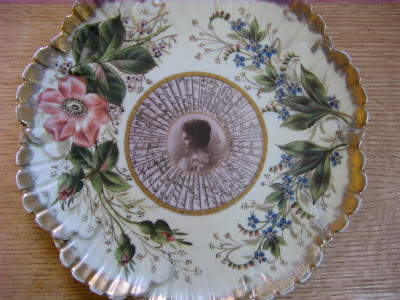 Has anyone ever heard of Signature Plates before? They are new to me. (Click on photo to enlarge.) 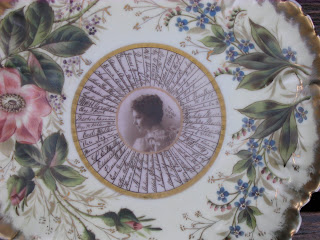 Here is one I found recently on eBay. I bought it only because it reminded me of Signature Quilts! It's dated 1894. 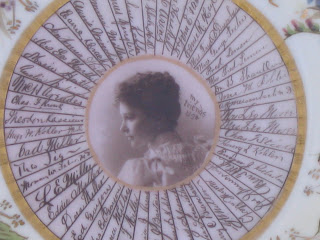 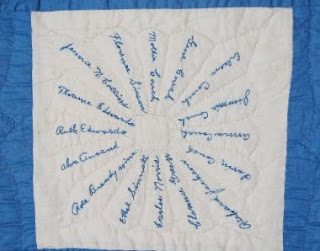 All the following blocks are 20th century.

To the left embroidered in blue is a similar signature quilt block pattern from a quilt currently on eBay.

I have found this dealer very reliable over the years. This particular signature quilt is said to come from Central Ohio. 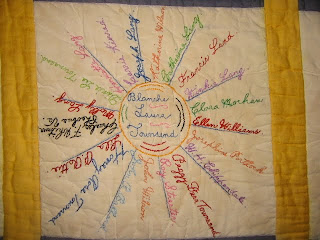 The next Signature Quilt block is again in the wheel-spoke pattern not unlike the plate I found above.

This quilt is from my collection and is dated 1941-42. It actually has a name in the center of each block. It was made in Norfolk, Virginia by Unit No. 5 of the Ladies Auxillary Fleet Reserve Association, although the names come from all over the country.

Only 16 people took the time to add where they were from and most of those 16 were from Indiana. A few from New York and California also mentioned their location. You can read the complete documentation of this quilt in the Quilt Index Signature Quilt Pilot Project here. All 350+ names are transcribed 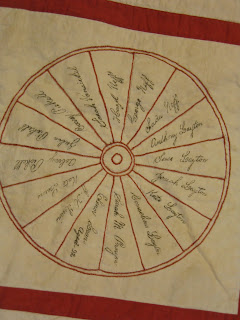 The quilt to the left and the one that follows are both from the collection of Peggy Gelbrich. 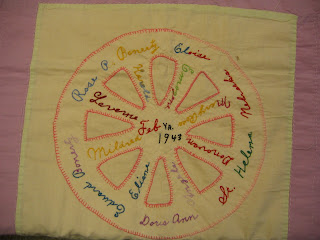 I am now pouring thru my quilt history library to try to find a photo of the earliest Fund Raising Signature quilt done in this embroidered wagon wheel-spoke pattern. I found one dated 1898 in "Nebraska Quilts & Quilt Making" (Crews and Naugle, pg. 120) and two appliqued ones in "For Purpose & Pleasure" (Fox) in the wagon-wheel pattern. One has names embroidered on top of the red appliqued spokes in (pg. 106) dated "late 19th century".

The second quilt appliqued in blue in the same Fox book has the names embroidered in the white fabric between the spokes (pg. 108) and is dated 1898. The size and style of the wheel and spokes on this one is very much like the last block above.....much "fatter" spokes.

Still another appliqued wagon-wheel fund-raiser with names embroidered in the space between the spokes can be seen in "Kansas Quilts & Quilters" (Brackman, Hornback, et al, page 35). This one is dated 1896.

What is the earliest embroidered (non-applique) quilt you have seen in this wagon-wheel pattern?

Please leave a comment if you know anything about the history of these plates.

Here are some more details of the plate. 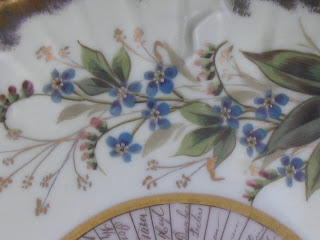 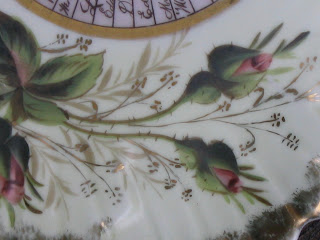 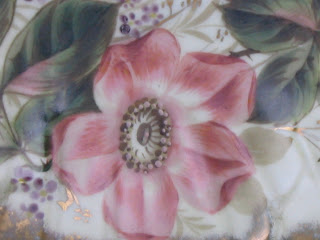 Posted by KarenQuilt at 11:30 AM No comments:

What do Sheep and Quilts Have in Common?

No, this is not our place but one can't be sitting at a computer ALL the time! I do occasional volunteer work at a local farm. 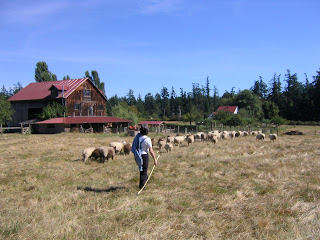 Such a peaceful looking scene. But where is the herd dog when we need one! I even lost one of my slip-on deck shoes one time trying to head these guys off. Sheep are so funny sometimes but goats are more fun!

I continue to have a ball helping a local farmer. Winter 2009 I bottle fed two baby goats and even helped mid-wife, under the farmer's supervision, an ewe who was having a difficult labor. The details would probably be more than most would want to know about! And of course it's all quilt-related! Sheep help produce quilts, too --indirectly-- right?! Of course! Some of the batts we use are made of wool! 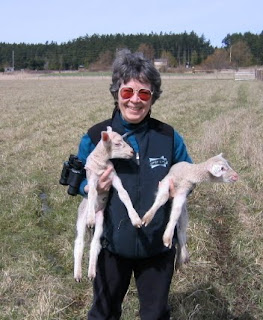 To the left are two lambs I managed to get my hands on spring of 2009 as we were moving them from one field to another along with their mamas. They had gotten trapped behind a gate so I had to rescue them. It was the only way I could catch them. They are so fast!

It's almost lambing season again! Can't believe a whole year has rolled around since I helped Bruce with my so-called "untested" mid-wifery skills last year when there was an unexpected difficult breach birth. Bruce had tried twice but his hand was too large to manipulate the lamb in utero. I had never done such a manipulation before but he patiently walked me thru it step by step. The lamb was butt first and it was VERY difficult to get the legs unfolded so that we could pull him out feet first. It took three tries. I got him out but he unfortunately, he did not survive. Miracle of miracles, the mama did survive. 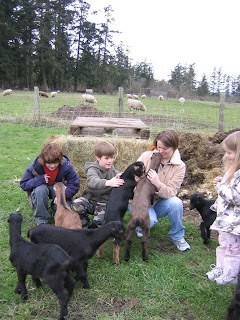 Here the grandkids are enjoying the other kind of kids. This was spring 2008 when Farmer Bruce got nine baby goats! No bottle feeding that year. It was all done by a nursery bucket that had multiple nipples on it. 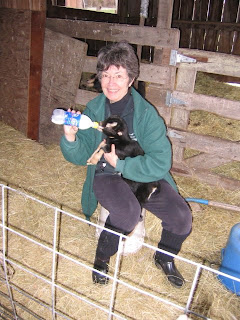 Photo below was taken last spring. Surrogate Mama is doing her thing with one of the two Lamancha kids on the farm. (Last year there were nine!) Six weeks later they followed me around like a couple of...well....well bonded kids! I have really missed them since they grew up, though I do see them from time to time. But the bigger goats want all the attention so when I get into the field with them, the Big Guys butt me around if I try to get near the younger two. I am no match for a full grown goat!

Now it is shearing time again. I didn't get to witness this last year but happened to stop by the farm the other day to buy some goodies at the farm stand, and shearing was in progress. 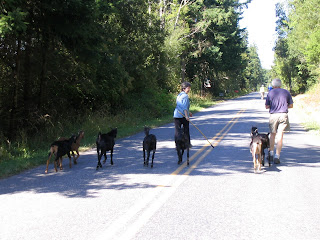 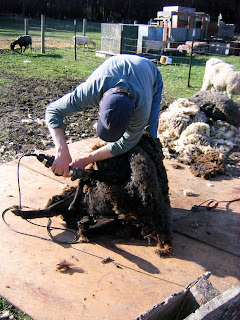 They look so naked without thier coats! 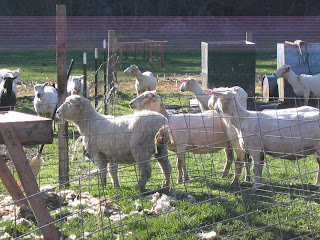 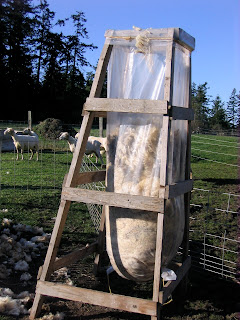 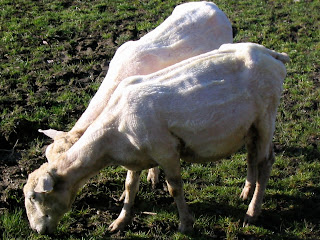 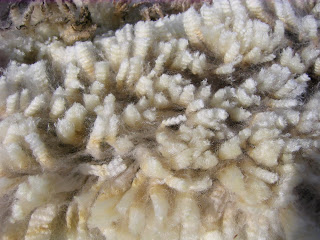 
Time is Flying by Already!

The New Year is here already! I will never get everything done that I dream of doing if time doesn't cooperate and slow down!

I spent hours browsing the Internet New Year's Eve for quilt history nuggets and somehow 4 days slipped by without my hardly noticing!

I found an unusual quilt on eBay whose triangles seem to be held together by what the seller is calling "tatting". Click on the photos to enlarge them. 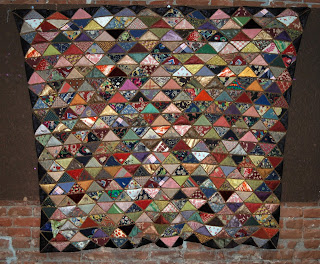 When I posted the link on the Quilt History List a friend posted that she thinks it is "faggoting, not tatting" and gave me a great link to see the process.

AQSG member Barb Garrett wrote: While I've seen puff quilts like this where the "puffs" are sewn together using a whip stitch, this is the first time I've seen one with the triangles attached in this manner.

I however would disagree with the seller. From what I can see in the picture, I don't think this is either a tatting or crochet stitch. I think it's faggoting, specifically Twisted Faggoting. Using google, I found a definition --

*Faggot Stitches* Faggoting is both useful and quite beautiful. It is used in joining of two pieces of material by means of an insertion stitch. 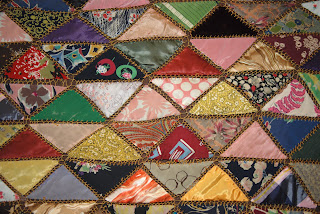 The quilts (comforters) I've seen made from this technique (fold a square diagonally in half, stuff with some batting and sew the edges, then attach the triangles) have either been that shiny slippery 1920s fabric, or cottons. My most recent sighting was made using 1950s fabrics.


However, Newbie Richardson, a costume & textile specialist, had this to say about the connecting stitches:

The coverlet under discussion - the one with the thread joining the triangles - is made using an "open hem stitch" to join the fabrics. It looks like a feather stitch - but when the stitch is done to join fabrics, it is called hem stitching. Faggoting - a close cousin - has lines of thread that are perpendicular to the fabric, this stitch is going diagonally across and twisting. 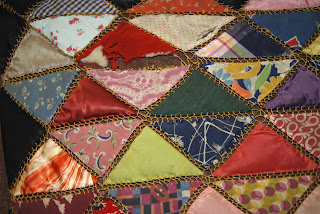 We usually see these kinds of stitches done on really nice linen blouses from the 1930's and 40's. They are used in the seams to join the sleeves to the armhole, or the placket to the fronts, etc. I found it on page 182-183 of Caulfield and Saward's "Dictionary of Needlework". However, it may be a question of nomenclature. The site Barb referrenced showed "bar fagotting" -and that could be it too. I have looked for that stich in a few of my books - but no luck. So it seems a question of vocabulary. Remember, most embroidery stitches are variations on a theme and depend on whether the needle goes under or over the thread, etc.

Barb just sent me some additional information about a form of quilting that is called "Stuff and Puff Quilts" that is a somewhat similar method. She writes:

On page 3 they give 2 options for joining puffs -- "Hold or pin 2 puffs closely together. Overcast edges of each puff together using a double strand of quilting thread." The other choice -- "If desired all units may be joined on the sewing machine using a close zig zag stitch in a contrasting or harmonizing color thread."

The book includes patterns and directions for making many different designs using this "make puffs and sew them together" method.

Never having done either form of needlework, I wouldn't have been able to tell the difference myself. Thanks, Barb and Newbie, for sharing!

Now to share a photo with you of a new Signature Quilt top I acquired recently. I'll tell you more about it in my next post. It is probably from New Jersey. 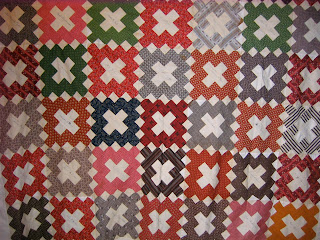 Have a Wonderful New Year!

Resources: The three photos of the "quilt" in question are all courtesy of the ebay seller.