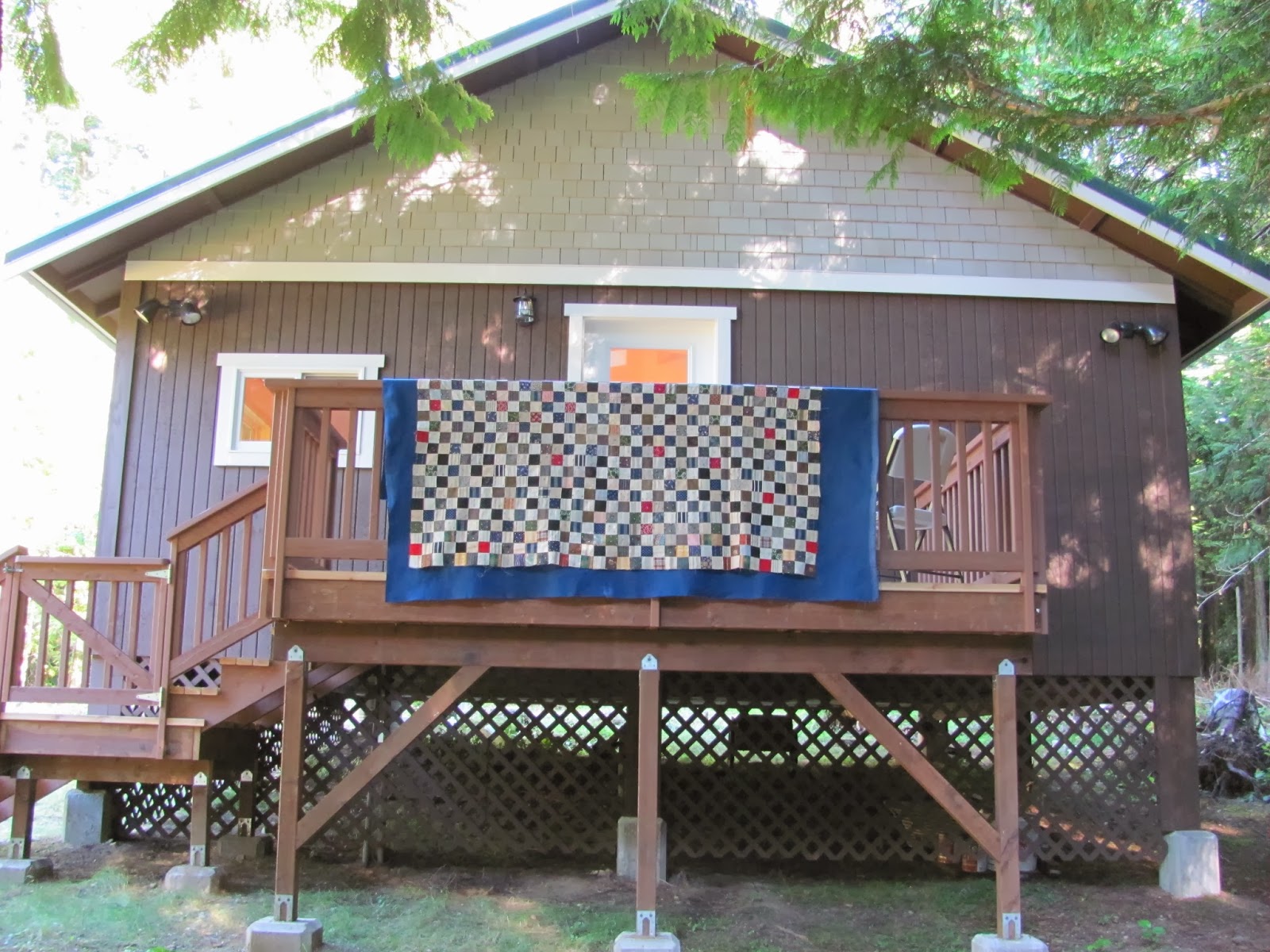 As we prepare for the first Lopez Island Quilt History Retreat, as well as the opening of the 2014 Brave, Bold, Beautiful: Women of Lopez exhibit at the Lopez Island Historical Society, I become fascinated once again by the stories of the  women of this island.

I am naturally drawn to memories of my mother-in-law Wini Alexander, as well.  Wini became a part of this history when she moved here in 1981 at the age of 64. What an incredible impact she had on my life as well as on the history of quilting in this island community.

You can read more of my writing about quilting on this island via the links below:

Below is the Winter Wonderland (my name) Sampler quilt Enchanted Quilters made in 1997 and raffled in 1998, the year before Wini died. 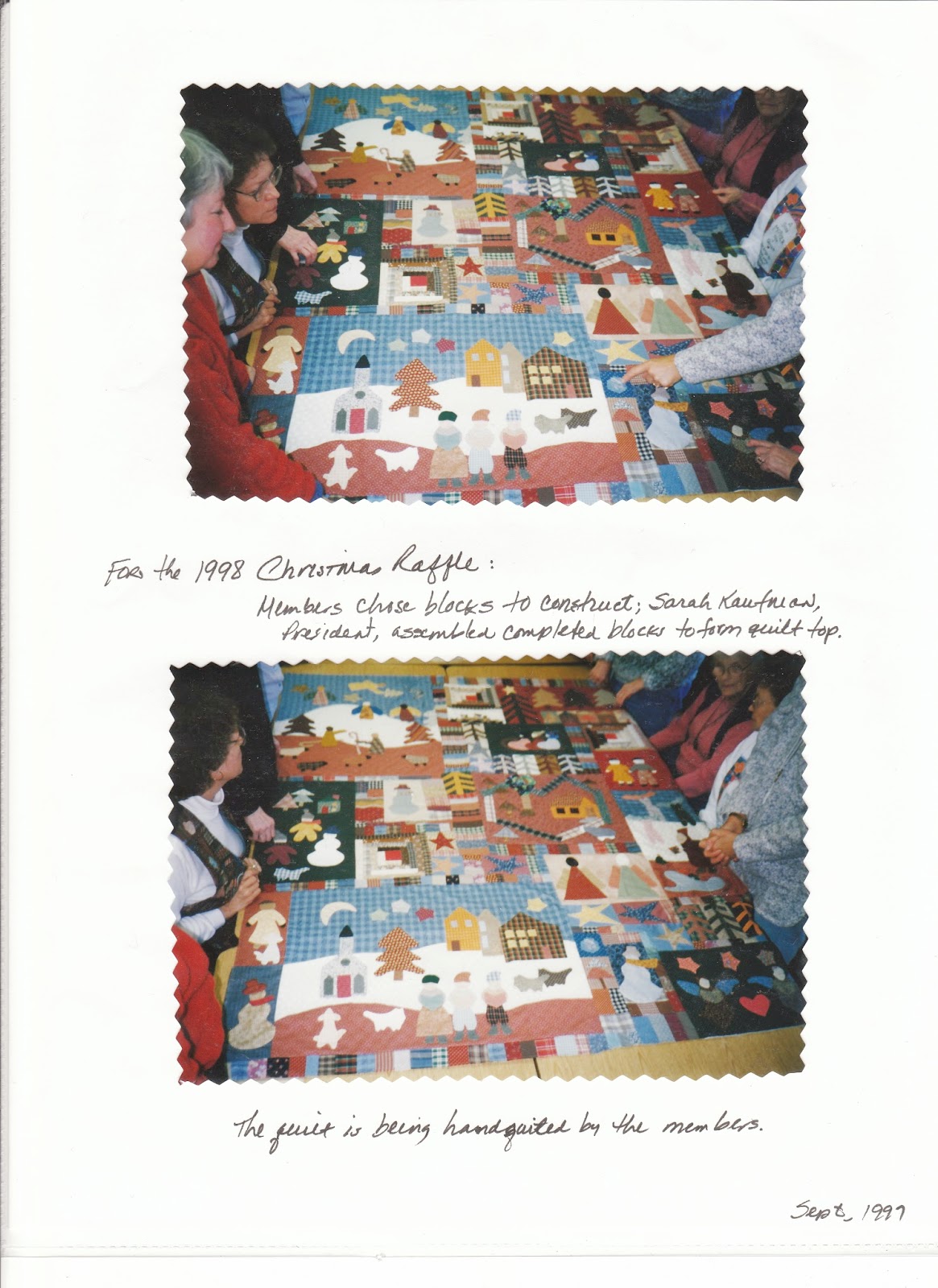 
I'll be posting photos and stories about the LIHS exhibit Brave, Bold, Beautiful: Women of Lopez after the museum re-opens at the end of April.  Please visit our Facebook page as well as our website.

I will also be posting photos and stories of the Quilt Retreat after it ends.

I really can't talk about the meaning of my Quilt Cabin without sharing some of the story of my mother-in-law's influence in my life. Without her, I don't think I ever would have gotten into quilting….and I simply can't imagine what my life would have been like had I not gotten into quilting—which led me to quilt history! 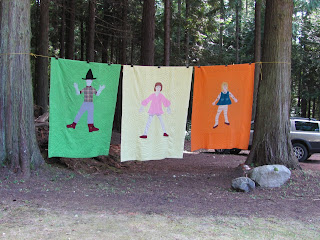 The three quilts quilts above made by Wini (Winifred Margaret [Waters] Alexander, 1917-1999) were instrumental in launching me into the study of quilt history. The documentation of Wini's needlework is ongoing.

In  2005, the LaConner Quilt Museum Invited me to curate an exhibit of Wini's needlework to run January - Feb 2006. It was a great catalyst to get me started in documenting her needlework. Inasmuch as I had saved 30 years of her correspondence, I relied heavily upon the letters I had saved to help create detailed documentation. 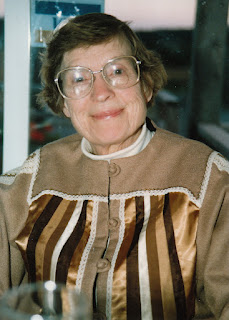 Wini, as she was known to her many friends, was a prolific seamstress and needle worker all her life, and taught junior high level Home Economics in the Seattle Public School system in the 1970s. After she retired from teaching, she taught clothing construction and embellishment, as well as quilting and other forms of needlework through guilds and fabric or quilt shops wherever she lived.

Wini helped organize many raffle quilt projects to raise funds for various non-profits throughout her quilting life. She was also instrumental in helping found the Enchanted Quilters of Lopez & Shaw Islands and the Northwest Quilting Connection, and created NQC's newsletter, serving as its editor for 12 years until her passing in August 1999.  After Wini moved to Lopez Island in 1981, people occasionally addressed mail to her simply as "The Quilt Lady on Lopez Island" and the mail invariably reached her! 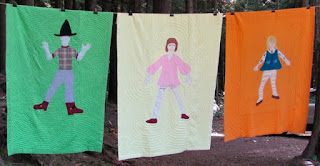 Cowboy Dan, Sarah in Pink, Dancing Lori Jo all made in 1975 and presented to the kids on Christmas Eve. Below they are snuggled under them on the cots in the living room, cots that were set up in order to create more sleeping space for visiting adults.

Another great thing about these three quilts is that the kids designed them themselves without ever suspecting their grandmother would turn them into quilts.  The eldest created her self-portrait at school by laying down on butcher block paper and having someone draw around her. Then she filled in the face and clothing. When she brought this home, the others wanted to make one, too, so I found similar paper and we made two more. Then I suggested we "send them off to Grandma so she can see how much you have grown." The rest is history.

The additional wonder of these quilts for my children is that Wini used scraps from actual clothing she had made them for the clothing on each quilt, so they recognized themselves immediately! 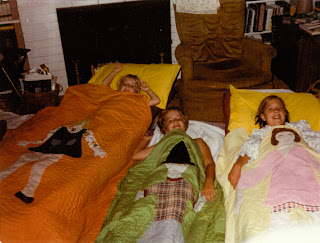 Documenting the Quilts We Create

Wini began to make a list of the quilts she had made after I gave her a journal following my lecture “Documenting Our Lives As Quilters” at a National Quilters Association meeting in Bellingham, WA, in October 1985.

According to this journal, Wini attempted her first quilt about 1948.  Her first entry reads, “The first quilt I made was not worth remembering. It was a Double Wedding Ring, made by machine with as many shortcuts as possible. It ended up as a furniture cover when we moved.” (Her eldest daughter recently told me that she remembers that quilt!)

Her next attempt at quilting was "an appliquéd tulip made as a bedspread for Ronnie [eldest daughter] in our new Normandy Park House in 1959. Appliqué was so-so, quilting not good. She has it still (?)"  A 2nd quilt was also made in 1959. "Embroidered and appliquéd (1959) Pinocchio Story Quilt for Marlee. Given to cousin Janet after Marlee died." (Note: Wini's youngest daughter Marlee died in 1965 at age 16 of cancer. The family was living briefly in New Orleans at the time.)

Quilt #4, “Spider Web,” was a "strip quilt done on paper which I didn't know about removing! As I quilted it over an old bedspread I realized what a poor job I'd done. Done about 1969/70. Now used for Lopez Quilt show Banner."

Quilt #5, “Marlee's Star,” Wini records on page 2: "In 1964 I ordered a set of Pennsylvania Dutch Hex Signs for embroidery or quilting. I tried several and Marlee really liked a 12-point star design, so I decided to make a quilt for her hope chest. A few months later she died. Ten years later (1975) I made the quilt. Now used on guest bed."

1975 marks a definitive year in Wini's quilt making for she records making 5 quilts in that one year alone. The three you see hanging on the line at the beginning of this blog post are among the five she made that year. Below is a photo of Sarah's drawing next to the finished quilt.

This is the first quilt made by Wini that I ever saw and it blew me away. It arrived the year before the three full-portrait quilts you saw above.

I sent Wini our eldest child's art work starting at age 2. When Sarah was 8, Wini interpreted her selected favorites of Sarah's art into quilt blocks and made a quilt for Sarah's 8th birthday. Even the quilting designs in the solid blocks are copies of Sarah's art! 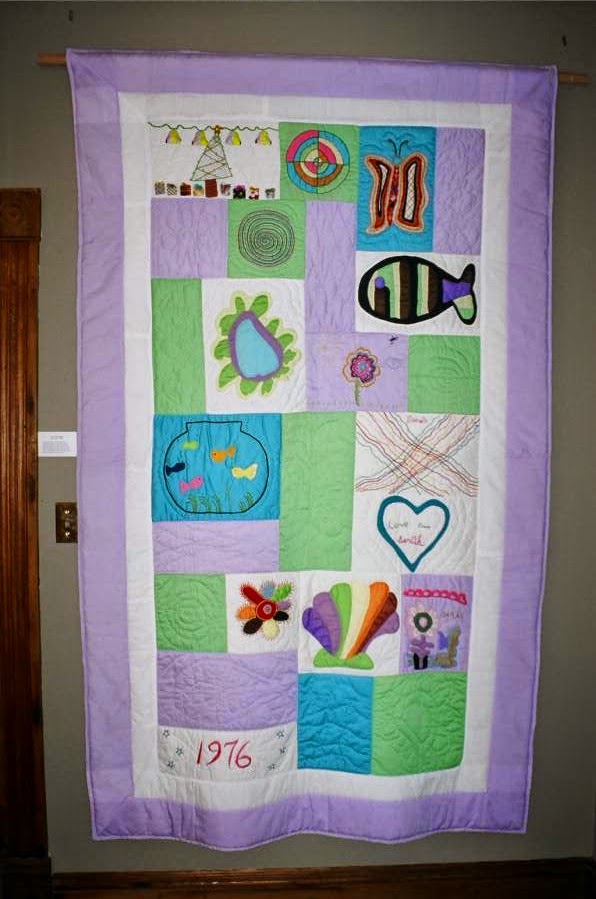 From there her quilt making and her quilting skills took off. By now, in addition to daughter (Ronnelle nicknamed Roni) and son (Gary), Wini had a daughter-in-law (Karen) and three grandchildren (Sarah, Daniel, and Lori Jo), all who dearly loved her quilts and anything she made with thread and needle. The documentation of Wini's needlework history, especially her quilting, is ongoing. One of the biggest challenges will be to discover the specific sources for her patterns. 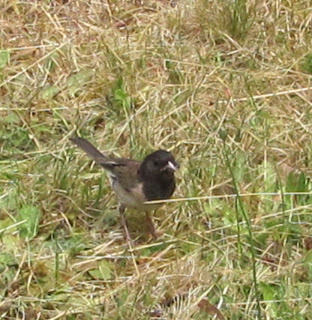 Posted by KarenQuilt at 12:19 PM No comments: