Some Designs are as Old as the Hills 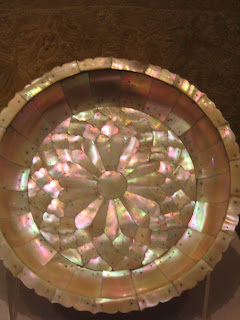 The above photo taken at the V&A's 2007 Turkish exhibit jumped out at me the other day as I was browsing my files. It so reminds me of the Signature Quilt designs I have been writing about recently ever since I found the Signature Plate on eBay.

It resembles both the so very familiar traditional Dresdan Plate that began to appear in the 20s as well as variations of Dahlias and various Sun patterns (see Brackman's Ency. of Applique, design 27.24). 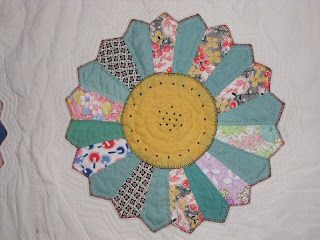 Here is a link to a photo of a seraser fabric that I saw at the V&A in 2007. Just scroll down to the 5th photo on this link. It is said to be the mostly highly prized of all Ottoman textiles according to the museum signage. The musum called this design "staggered roundels". Each "roundel" is filled with a stylized cypress trees alternating with rose buds and is said to be a rare variation of the usual repetition of medallions. 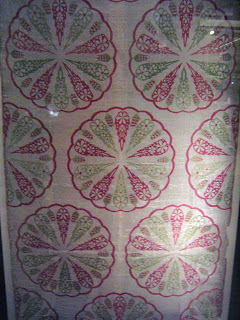 This is the photo from my archives of this same piece of fabric that this link goes to. Doesn't this remind you of many of the Signature quilt patterns?

The piece is dated 1550-1600 and probably comes from Bursa in Turkey. Silver-wrapped thread in the weft is used in its creation. Fabrics and textiles were highly valued for cermonial and symbolic purposes in the Ottoman Empire.

How often do you go back and re-visit photos you have taken? If they are photos of quilts, I revisit them often. It is inspiring to go browsing through the photos I took on my three textile research trips with Deb Roberts in 2006 (France), 2007 (U.K.) and 2008 (Spain, Italy and Turkey). It never fails to amaze me how many fabulous textiles we always manage to see when with Deb. So many of the Indian and Middle Eastern designs were inspiration for American quilt makers from their earliest days.

The mother of pearl plate seen in the first photo was sitting in front of a yellow silk coverlet, quilted and embroidered and dated 1600c. It is said to have come to Europe via the Portuguese trade, probably from Satgaon, Bengal. 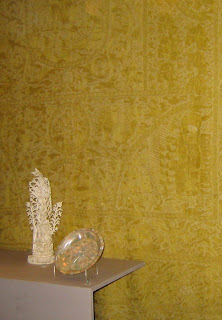 Once the European trade began in Indian cottons in the 1600s, quilts --as well as fabric designs-- were often made to European specifications since most Europeans found the pure Indian design sensibility too "different" for their tastes. Quilts from this period frequently intermix European symbols with Hindu elements. According to the notes I took, this piece has a "central shield showing the Judgment of Solomon surrounded by other Old Testament scenes. In the main field are depictions of Greek gods, fantastic creatures from Hindu myth, and Portuguese soldiers and hunters."
Posted by KarenQuilt at 12:39 PM 1 comment: