It's solving the mystery that is so entertaining and exciting.
Unfortunately, I haven't solved this one's mystery yet. 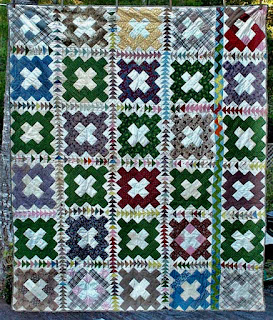 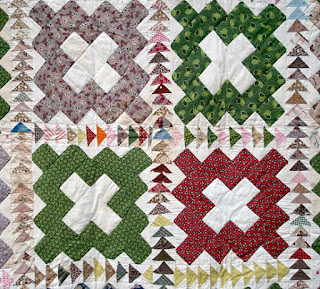 Here is what the seller had to say:

I have never quite resolved my questions about this charming scrap quilt. Maybe you can "put together the pieces."

Here's the mystery: Only one block has a name: 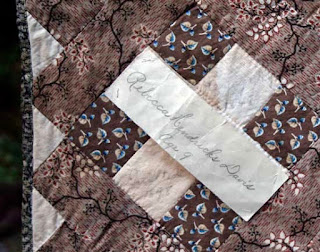 A corner block has a piece of paper stitched diagonally across the center. Written on that paper in pencil: "Rebecca Hendricks Davis Age 9"

The cloth on the other half of that cross also has pencil inscriptions. One square says "Cayuga NY 1848" and the opposite square says "Quilted 1898."

It appears that the quilt top was MADE (pieced together) in 1848. The fabulous array of printed cottons supports that date.

Then it seems that the quilt is telling us that 50 years later, in 1898, someone(s) finished and lightly hand quilted this beautiful piece. The printed back and the binding fabrics are consistent with 1898.

Now, what about the nine year old girl, Little Rebecca? Was the quilt made BY her? FOR her? As a memorial for her?

Well, whatever the story, this is a wonderful quilt with such gorgeous mid-19th century prints. The prints are lively ~ and the various, whimsical borders and grids. 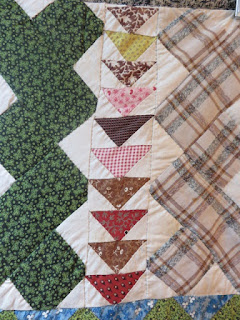 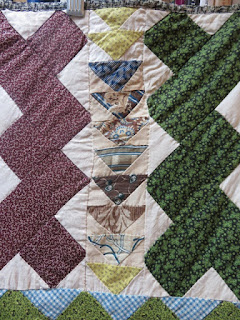 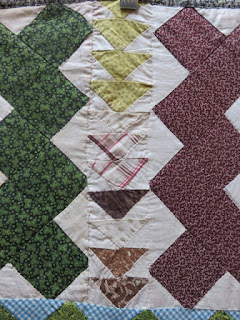 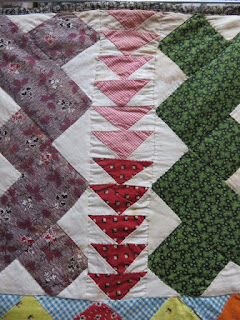 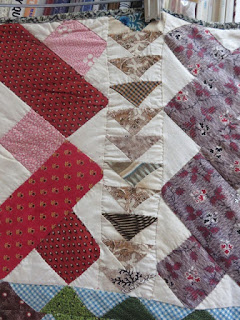 My latest quilt project....applique quilt blocks which I have unexpectedly turned into vehicles for gathering the signatures of jazz musicians!

I have been stitching on these blocks over our last two adventures with The Jazz Cruise. This year I suddenly thought...why don't I use the blocks to gather the musicians' signatures! Wa-la!

Now I am going to try to design a rather "jazzy", unconventional setting for the blocks, not at all like the original blocks from the 1870s quilt would have been set. It will be fun to comb thru the gazillion digital photos I have stored, as well as my books, to get some ideas.

Meanwhile, here is a link to another much smaller project where I collected the signatures of jazz musicians. 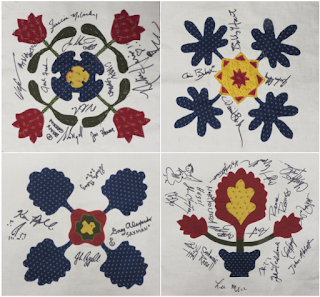 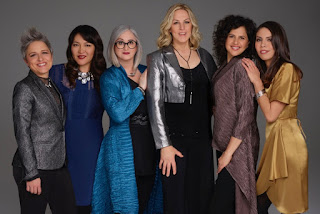 Gary tried to decipher the signatures after the fact. I should have jotted them down on a paper list as they signed each block but it didn't occur to me at the time.
I haven't deciphered all the signatures, but by comparing their signatures on Gary's CDs and the context of who played with whom, we can identify about 80% of them: 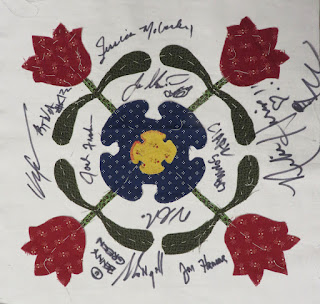 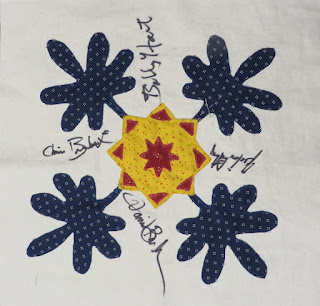 The upper right quilt block is dominated by the Brubeck Brothers -- Chris Brubeck (bass and trombone) and Daniel Brubeck (drums), with drummer Billy Hart.  It was such a pleasure to listen to Dave Brubeck's sons play in person and to also hear them share their family stories and memories. Daniel actually lives not too far from us here in the PNW.  (And, of course, I am partial to the name Daniel anyway given it's the name of my son, brother and grandfather!) 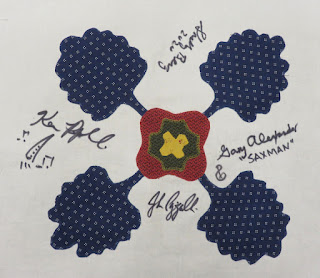 The lower left block captures the "Name That Tune" leaders. It's hosts are the wonderful talented, witty Ken Peplowski on clarinet; Shelly Berg on piano; Johnny Pizzarelli on guitar (and comic foil to Ken) and Gary Alexander ("Saxman Alex"/KLOI Radio DJ, Lopez Island, WA), as a "Name That Tune" contestant. 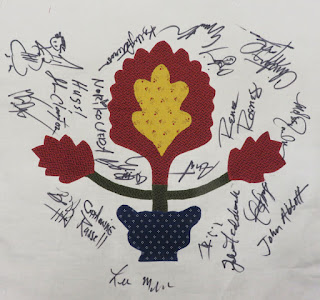 The final quilt block is dominated by "Artemis," the all-women instrumental sextet (check them out!!!!), with Melissa Aldana, tenor saxophone (and still in her 20s); Anat Cohen (clarinet) whom we have heard many times on the Jazz Cruise; Renee Rosnes (piano), Ingrid Jensen (trumpet), Noriko Ueda (bass) and Allison Miller (drums).

Other women in that block are vocalist Catherine Russell and Kelly Peterson , widow of pianist Oscar Peterson). (Kelly was so excited when she saw my quilt block and exclaimed that she is a quilter, too!) 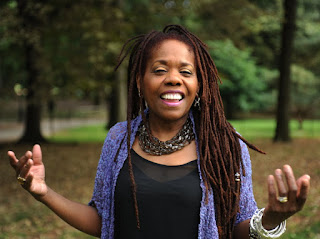 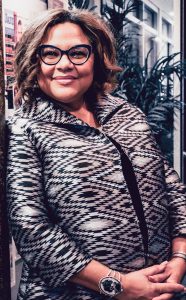 Melissa Walker of Jazz House for Kids (check this out!) 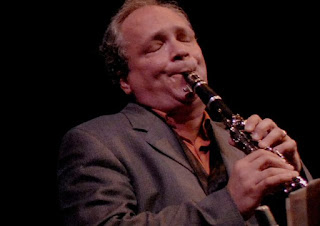 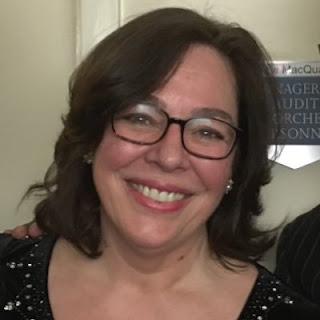 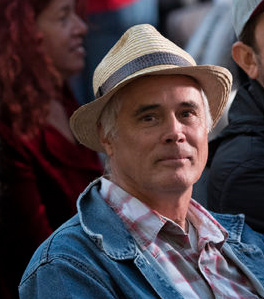 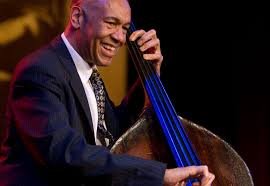 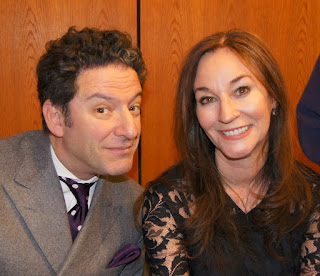 Emerging as the unsung hero is John Fedchock, a superior jazz trombonist who also wrote all but one of the arrangements. It’s a typically eclectic Herman set, with themes drawn from Ellington, Coltrane, Monk, Bob Haggart (a fine “What’s New?”) and Fedchock himself. “Conga” is a brisk Latin pace-changer, and Lou Donaldson’s “Fried Buzzard” a vehicle for some funky cooking. “Epistrophy” is done partly in 6/8, building tension with Herman on soprano sax. Frank Tiberi, the band’s veteran tenor sax soloist, and Lynn Seaton, playing bass and singing a la Slam Stewart, contribute valuably to this 4 1/2-star session.

Other musicians in this quilt block include John Clayton (bass) and leader of the big band and sweet, sweet guy we have had the pleasure of meeting many times; John Fedchock (trombone); Christian McBride (bass and big band leader) and his wife Melissa Walker of Jazz House for Kids; and Emmet Cohen (piano and organ), a wonderful young we have had the pleasure of seeing every year since his first jazz cruise (and ours!) about 10 years ago.

Signatures from guys "in the background" (i.e. not on stage) include Lee Mergner (editor of Jazz Times and sweet guy) and New York photographer John Abbott (official photographer of the Jazz Cruise), who just sent us a video of the "Name That Tune" contest in which Gary participated.